After establishing himself as an artist over the past few months and cementing his sound with the release of 4 new tracks, Scribz Riley has released his debut EP Wish Me Luck with lead track “Introduce Myself” feat. KWN & JADA. 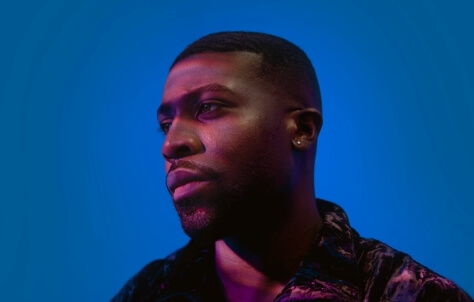 Hailing from East London, but residing between London and LA, Scribz has worked with artists such as Khalid, H.E.R., J Hus and Cardi B over the last few years, establishing himself as an acclaimed award-winning producer and songwriter, notably achieving two GRAMMY Awards® along the way.

With an edgy sound that blends multi-genres with R&B and Rap, Scribz introduced himself as an artist in his own right this year with the singles “East Side,” “Impress Me” feat. Headie One and “Mandy.” Having clocked up almost 4 million streams, he has received playlist support from the likes of 1Xtra, been tipped by the likes of Complex, Hypebeast, Elevator, Flaunt, Notion, GRM Daily and has just been announced as a VEVO DSCVR Artist To Watch 2021.

Building an impressive and unique body of work through each release, Scribz recently shared new song “On My Sleeve” feat. Kaash Paige and leads the release of his EP with new track “Introduce Myself” feat. KWN & JADA. With an upbeat R&B beat and soulful vocal flow, it’s another unique delivery alongside newcomers KWN and JADA and the perfect lead into the EP.

“My first ever project. It’s a collection of my thoughts and experiences over the past couple of years. I hope there’s something in there for people to relate to in some way,” says Scribz. “The title Wish Me Luck is basically what it says on the tin – although I feel confident in the music, in the early stages there was a lot of uncertainty for me on how it would be received, especially with making the transition of being a producer to becoming an artist. I guess it is me moving forward into the unknown, so wish me luck…”

Anticipation has been steadily building for debut EP Wish Me Luck and Scribz has built up a loyal following for his distinct and polished sound. A musical statement of intent from Scribz, marking that moment before he made the switch to artist as well as producer, the EP features all four singles above alongside a host of brand-new unreleased tracks. Featuring guest vocals from the likes of 6LACK, Headie One, Kaash Paige and KWN & JADA, the full tracklisting is as follows:

While Wish Me Luck signifies the final part of Scribz’ first chapter, it’s just the start of the remarkable musical journey yet to come. Keep an eye on Scribz Riley.

Violence In The Music Industry | The Joe Budden Podcast

Cedrick "Swab" Cotton, a former member of the popular 90s R&B group Ideal, was stabbed to death in broad [...]

Clark Atlanta University (CAU) is proud to announce its partnership with Propel Center, a new global cus headquartered in

Racking up millions of streams at a rapid pace and asserting himself as a rising star, rapper YSN Flow unveils his [...]

PG County rapper/producer/visionary IDK releases his new single “2 Cents,” along with an accompanying video via Clue/Warner

On the heels of widespread acclaim for her official debut courtesy of Billboard and more earlier this year,  Charm