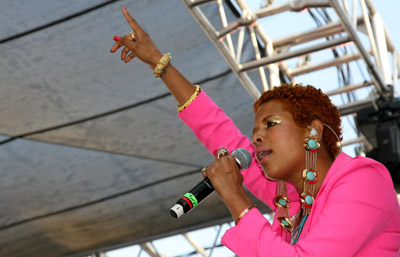 R&B Recording Artist Kelis Joins Tavis Smiley to Talk About Her Time in Culinary School and Her Latest Album: “Flesh Tone”Friday Night Interview on PBS R&B singer Kelis will appear tomorrow on PBS’ “Tavis Smiley” to discuss her recent hiatus from music, her time in culinary school, and her latest album “Flesh Tone.” Check your local listings for air times. During the interview, Kelis explains how “Flesh Tone” is different from her previous albums, and how she approached the label, Interscope Records:”I brought a finished album to my label. The only reason why I signed to”¦such a major label is the fact that they took me as I am. That was a stipulation for me. I was like, “honestly, I’ve been doing this since I was a teenager–I don’t really care like that anymore– I want to do what I want.’ My last experience was so ugly that I just feel like, if this can’t be, if I can’t really put my heart in it and leave it as it is then I don’t really need any part in it. And between Will.I.Am and Jimmy Iovine they were both just like, “˜Okay, you know” and I was like, “˜Okay fine, I’ll do it.’ And that’s really, for me, the record sounds like that though. It sounds like there was no one hovering over it. When I played them the record everyone was like, “˜Well what’s your first single gonna be?’ Because it wasn’t your obvious, radio-friendly”¦especially coming from what people were categorizing as R&B or rhythmic whatever, to doing something else. And as a black artist in America, it is so segregated as far as the radio goes and how they position music on the radio.”You can preview a clip/post a link here: https://bit.ly/azOGJU Kelis is an R&B singer and songwriter who broke onto the pop scene with her hit single, “Milkshake.” Kelis began her professional music career just after graduating from high school. She collaborated with musicians Pharrell Williams and Chad Hugo to produce her first album, “Kaleidoscope,” which was extremely successful in Europe. Kelis found success in the U.S. with her third album, “Tasty,” which included her hit single, “Milkshake.” On that album, Kelis began collaborating with a number of different producers including Andre 3000, Rockwilder and Raphael Saadiq. Her fourth studio album, “Kelis Was Here” was nominated for a Grammy Award in 2007 and included the platinum single, “Bossy.” Shortly thereafter, Kelis left her recording label, Zomba, and took some time away from the recording studio. She attended and graduated from Le Cordon Bleu culinary school, and has now returned to music. Her latest album, “Flesh Tone” will be released in the U.S. on July 6, 2010.About TAVIS SMILEY on PBSTAVIS SMILEY is a unique hybrid of news, issues and entertainment, featuring interviews with politicians, entertainers, athletes, authors and other newsmakers. In 2009, Tavis Smiley was named to TIME‘s list of 100 “Most Influential People in the World.”TAVIS SMILEY is produced by The Smiley Group, Inc. / TS Media, Inc. in association with KCET/ Los Angeles . Major funding is provided by Walmart and Nationwide Insurance. Additional support comes from PBS  and a one-time seed grant from the National Black Programming Consortium.The 30-minute program airs weeknights on PBS. To get local listings and to watch past episodes, please visit www.pbs.org/tavis.###