I have to be honest in saying that there was a time that I was not sure about the future of commercial radio. The industry was not growing and there was no new talent being bred for future success, or so it seemed, for almost two decades on the urban side.  Nevertheless, I’ve since changed my mind after exploring the country and listening to various talents in several markets. I have to be honest in telling you this list is not complete, there are certainly more people who need to be added to it.Who is making a difference? Who is going above and beyond doing a show and who has the greatest potential for success? I asked. Know that while great programming is paramount in radio, It’s also the talent that makes the radio industry a success and it’s the talent that will make radio a continued success.Listeners today have a lot of options when driving in their car or sitting at their computer, from audiobooks to podcasts to streaming services, to subscription services to commercial radio. Considering many successful stations have heavy commercial loads, it’s up to the host to lure people in and KEEP THEM. The people on this list have that ability.To that end, I’ve been keeping my eyes and ears open for what several radio pros are doing around the country and I came to realize there are indeed a group of radio people who are taking the bull by the horns and going the extra mile to give the audience more than just entertainment.These are the people who continue to break the mold in radio and who work with great programmers and producers to assemble great shows each day. They inspire, educate, entertain and inform. . Feel free to share 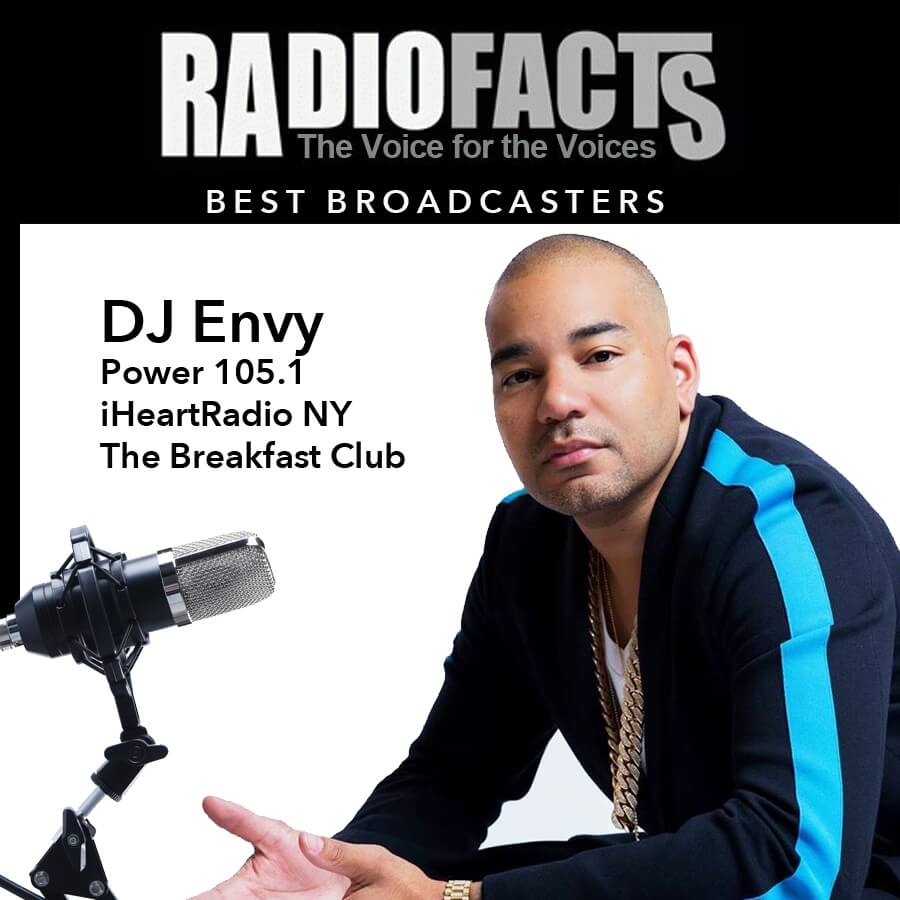 A couple of months ago, I attended Envy’s real estate seminar in Los Angles.  I expected more of the same that I have seen at other seminars where they give you very little information then ask you to pay thousands to continue learning how to make money in real estate. I need to add I am a real estate agent (as a side gig) with 10 years under my belt.When I got to the seminar, the room was packed and the seminar was very well organized and I was very surprised to see how much information Envy and his team were willing to share with participants at a fraction of the cost of other seminars. I watched Envy and his real estate partner Cesar do a heavy campaign on Instagram where he took a camera with him while he showed the audience how to look for the best properties before the seminar. It was a great campaign. I got to talk to Envy at the seminar and he told me he would love to make the seminar FREE in the near future.During a segment on The Breakfast Club Radio Show several months ago, Envy and Killer Mike got into a heated debate about the school system, when it was all said and done, Envy offered a certain amount of callers passes to his seminar free of charge.The reason why Envy makes this list is because I know SEVERAL industry people who have a TON of real estate who won’t share one ounce of information with others for free OR for a free. I am a firm believer that blessings come from giving not from being selfish and the fact that he is willing to make very little money teaching people how to make millions IN OUR COMMUNITY is nothing less than commendable.Envy goes above and beyond the call of duty to do radio. He uses his platform to educate and inform the audience on how to achieve independent wealth. KUDOS. (CLICK NEXT BELOW FOR THE NEXT BEST ANNOUNCER) 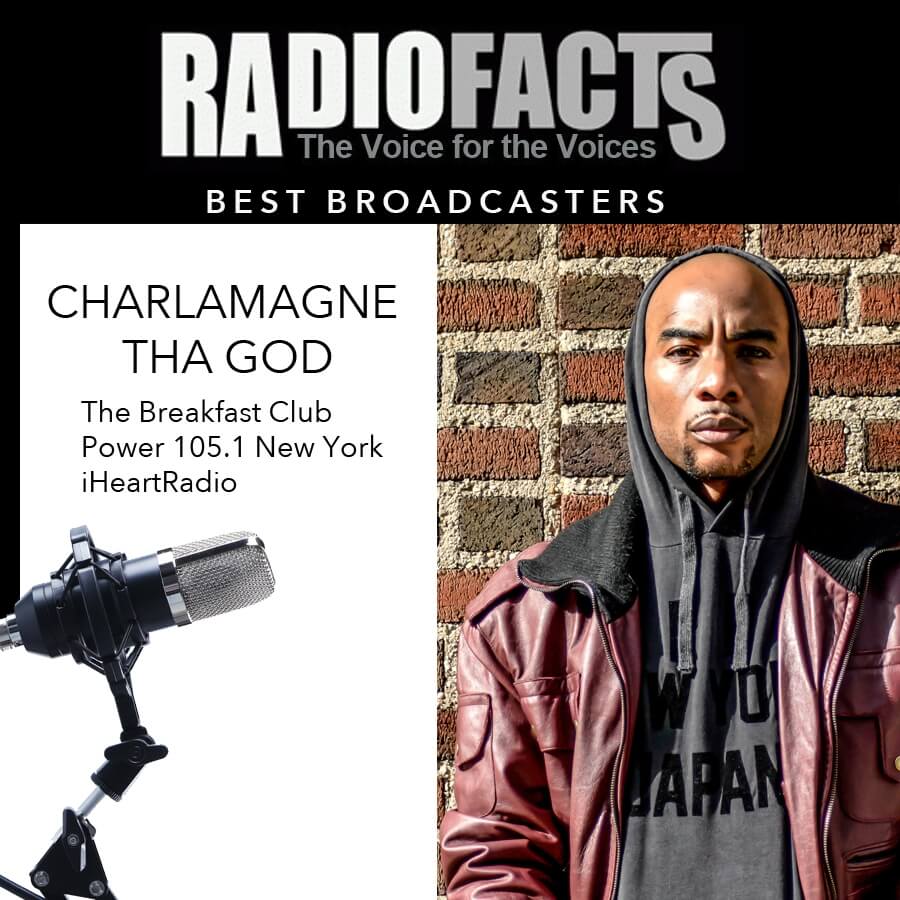 This past year, Charlamagne has pushed a much-needed agenda that I have rarely if ever seen a black male radio pro do.  He could have easily written a hit book on his encounters with celebrities on The Breakfast Club Radio Show but he chose to go on a road less chosen and talk about something that we (the black community) have continued to sweep under the carpet for decades … mental health.In our community, we have been through so much that we rely on our own strength to move past everything and anything but the truth is, if ANY community needs to discuss mental health, it’s the black community considering our history in this country. Charlamagne has grown by leaps and bounds over recent years and he continues to shine when he makes appearances on several talk and news shows. Without question, he will be doing a lot more TV because of his uncanny ability to reach various aspects of various communities and cultures. (CLICK NEXT BELOW FOR THE NEXT BEST ANNOUNCER) 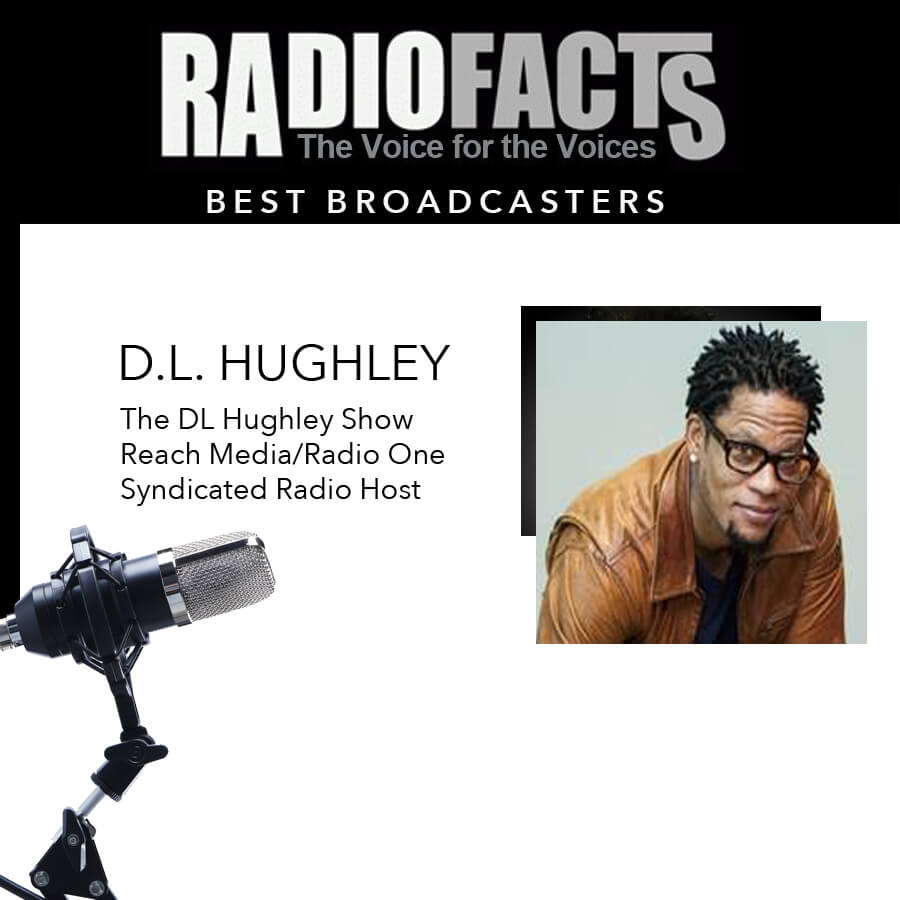 D.L. is one of the most talented people in the ENTIRE radio industry.  I often asked reps at his parent company Reach Media, why he and Jasmine were broadcasting from that bland studio before with no color that looked like a beige box. Once they added his TV show to TV One and introduced the new set it took the show to a whole never level of potential greater success.Scrolling through Instagram, D.L. is everywhere with his consistent commentary on police brutality and the imbalanced legal system Everything he says is right on point and you are constantly tempted to listen because you know he will make a stellar thought-provoking point.D.L. is a modern-day Dick Gregory and he blends comedy, information and humanity with the greatest of ease. Nobody can say this man doesn’t greatly care about the black community and he uses his platform to talk about the issues concerning us ALL. He works for a black-owned corporation that gives him carte balance to be who he is and to say what he wants to say. This has not always the case in the past because urban stations were often affected in the purse strings when they ran shows like this but this is a different time and space.I can’t think of anyone who does what D.L. does on the Radio as well as he does it. Since he has already been on TV and in other forms of media over the years, where he wants to go next is up to him but the doors will be open. (CLICK NEXT BELOW FOR THE NEXT BEST ANNOUNCER) 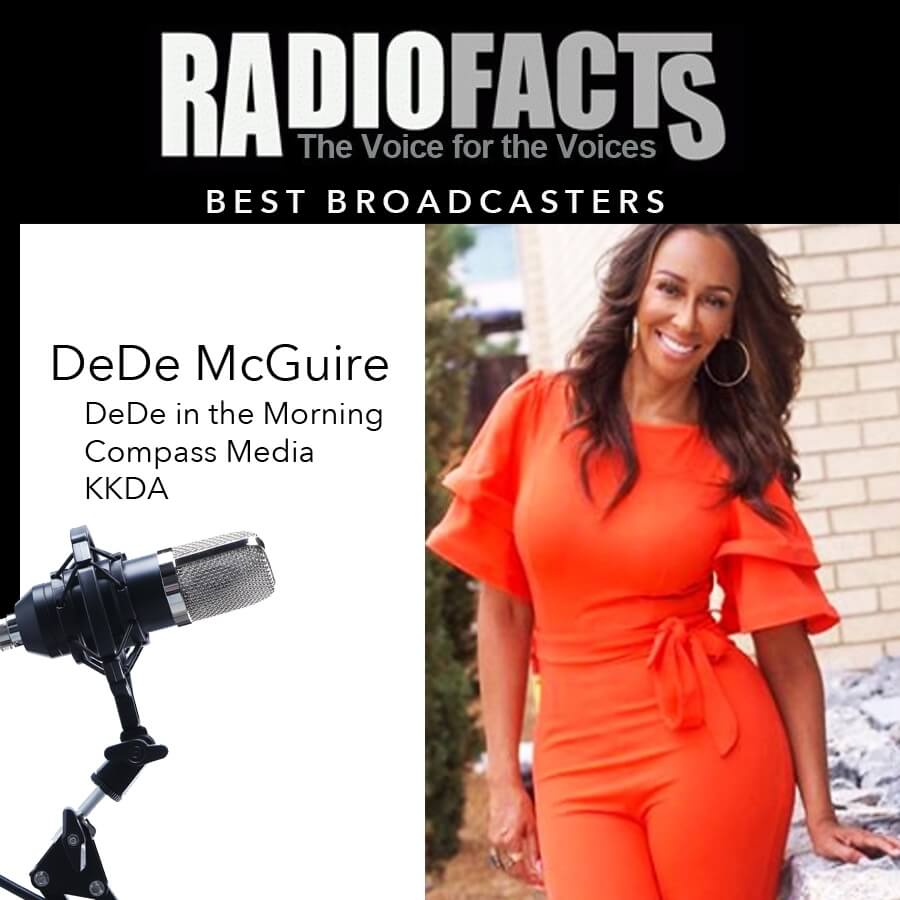 DeDe has been around a while and spent many years in syndication working with the late Doug Banks. She transcends to the mic and to the stage with an ease that bears no mask but a command that’s honest and enlightening. You just like her right away and you realize she’s still hungry and ready for more challenges. She is both a legend and a student of radio and surprisingly humble in her approach.A lot of women AND men that we talk to in the industry love DeDe and they are greatly inspired by her legacy. Without question, she is just scratching the surface. (CLICK NEXT BELOW FOR THE NEXT BEST ANNOUNCER) 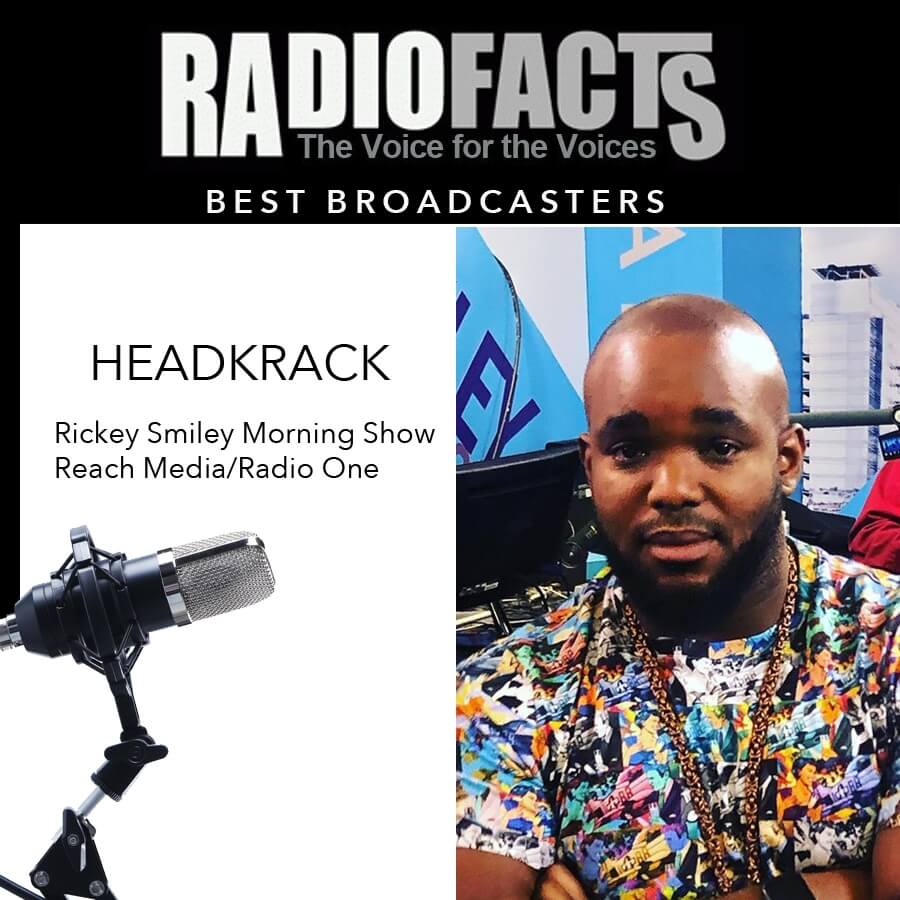 Headkrack is just scratching the surface of his future success. He seems to be able to do all the functions in the studio with ease and still ask great questions to guests and he’s entertaining at the same time. That’s not easy to do. He’s got a great radio presence and he’s beyond ready for his own show.The programmers that we have talked to around the country are speaking very highly of him and they are confident that we will be hearing a lot more from him in the near future. (CLICK NEXT BELOW FOR THE NEXT BEST ANNOUNCER) 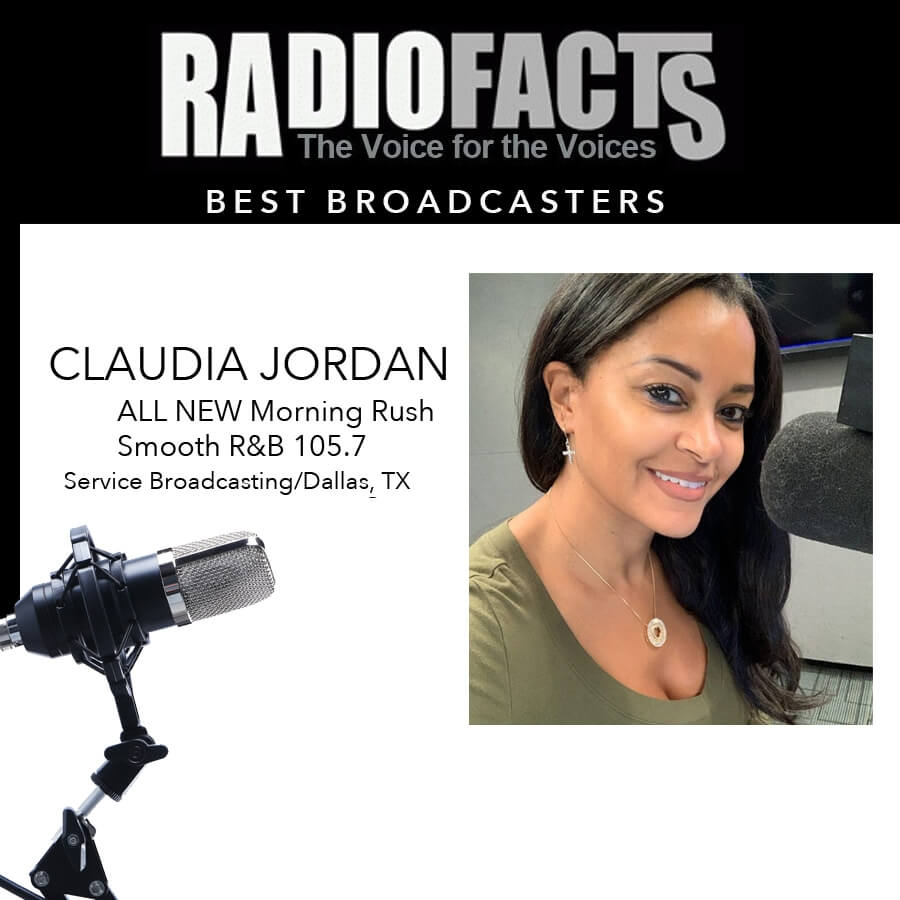 Claudia is another natural talent. She should have had her own show some time ago. I’ve been listening to her for years in her various radio gigs and appearances and there is no question that she can carry a morning show into eventual syndication. (CLICK NEXT BELOW FOR THE NEXT BEST ANNOUNCER) 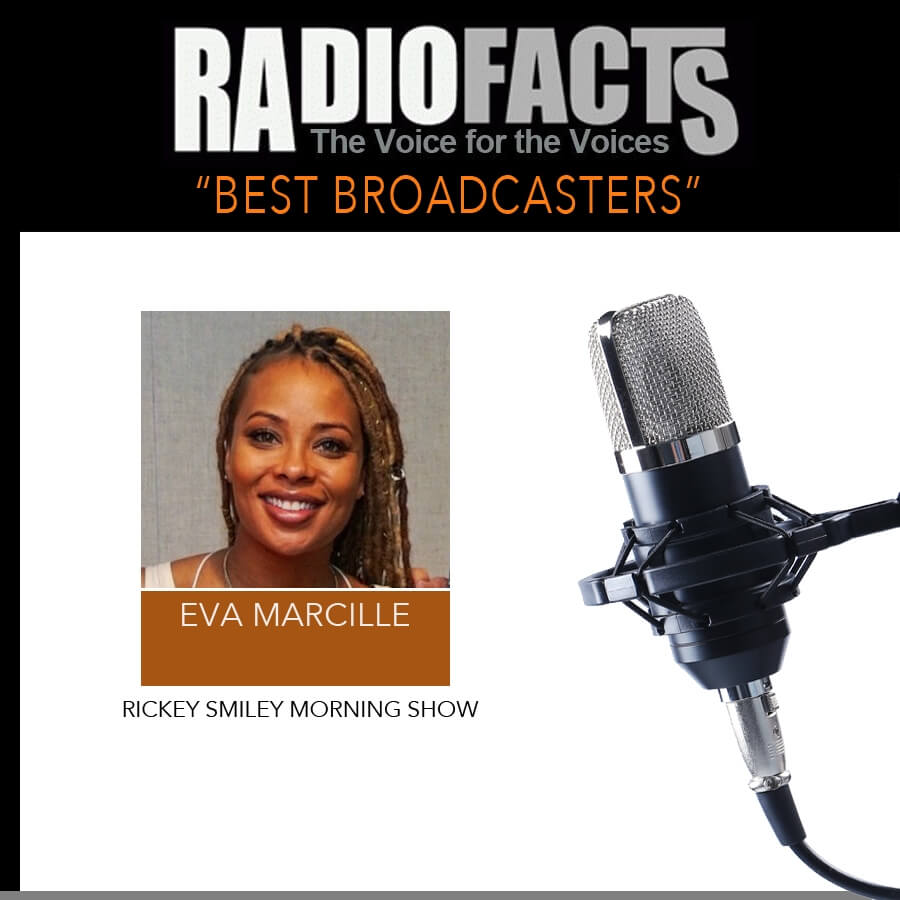 When Eva replaced Porshe on the Rickey Smiley Morning show while Porsha was on maternity leave, I expected a so so/fill-in performance. I was very wrong. Eva is very talented on the mic and she’s a natural. I voiced to several radio leaders recently that she would have been an excellent replacement for Jade Novah at V103 but she is supposed to be going with Rickey Smiley when he replaces Tom Joyner in January.Her on-air presence and ability to mesh with other members of the show is beyond commendable. She fit right in. I’ve watched her a few more times on Dish Nation to make sure my opinion of her was on point and she impressed me even more. Eva has the talent and ability to host her own show and I see it happening in the near future of course along with her other TV and media ventures………………………………………………….EDITOR’S NOTE: To all the Radio DJs who will reach out and ask why they didn’t make the list. It’s not done. These are just the first people I thought of for this story.

Has Someone You Know Committed PPP Fraud? Call The Breakfast Club!