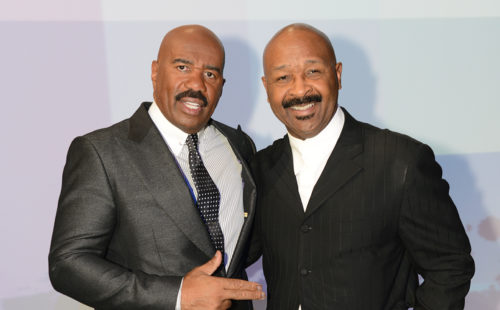 Surround Yourself with the Right People

We love to report stories of successful minority entrepreneurs and this dynamic duo has achieved an incredible amount of success with seemingly no effort. However I personally know that’s not he case because I was right there when Steve’s business partner Rushion McDonald recently stated “I have very few conversations that don’t pertain to money and if I could figure out a way not to sleep I would.” McDonald was talking about his never-ending commendable negotiation skills respected by many industry, business and show biz people alike.  He is the fuel that lights Steve Harvey’s fire and while the general public may not know who he is, the marketing and advertising world does. There is absolutely no stopping Steve Harvey these days and one has to wonder how he manages to do it all. Rushion recently told the story of how he and Steve met and decided to become business partners at a packed house for the Living Legends Dinner in Hollywood, CA. As stated I was lucky enough to be there and while he was the last one to get an award and many people had already left, his speech and ability to motivate the crowd was by far the best one. Back in the day, Rushion and Steve were both comics working the same shows many years ago and decided to team up as business partners to make Steve the star while Rushion handled the business end. Harvey did a sitcom years ago and left after doing 5 seasons (which meant he is probably still getting residuals from that) even though the network, we have heard, begged him to stay because the show was still successful. Steve’s move to leave when he did was brilliant as it’s always better to leave on top then to be asked to leave on the bottom when it comes to leverage.

(Recently, Harvey surprised his wife Marjorie with a white Rolls-Royce Phantom Drop head Coupe as a 50th birthday gift. The $443,000 car is a handmade convertible that is the most expensive Rolls-Royce model at this time)

After that Steve went on to continue something that he had started in Chicago many years before his TV show and that was radio when he did the morning show at WGCI and was bitten by the radio bug. However this time, Steve wanted to be on several stations to create more leverage. Let’s face it, it’s hard to fire someone from 20 stations at the same time vs one person from one station. In addition, he would have some control over advertisers. He inked a deal with Radio One and that worked for a while then things went south. Rushion explained that they could not let anyone think they were down about the situation so they acted as if they were still on the air, did some radio shows around the country as free agents and then they went to Premiere Radio for a deal and the corporation picked the show up. Now Steve in on more stations then he has ever been and his success in radio has led to his NY Times Bestselling books. After that, the movies about the books, He took over as the FIRST black host of Family Feud, a show that has been on for over 30 years. Harvey’s success on that show has opened the doors for other blacks to host game shows ALSO being the first ones like: Wayne Brady who is the first black host for Let’s Make a Deal and Steve’s friend Cedric the Entertainer who got to host Who Wants to be a Millionaire. Now Steve has moved to daytime talk and these are just some of the things that he does and he makes it all look so easy in the process. There is so much to write about Steve’s success, I thought that he could say it best with this motivational video about what it takes to be successful. Enjoy.