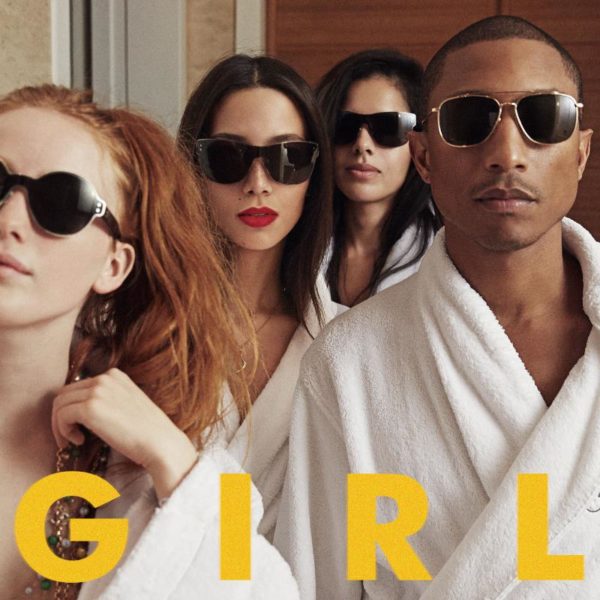 “When columbia records presented me with the opportunity to make an album, three things came to mind,” says Pharrell. “One was the sense of overwhelming honor that I felt when I realized that they were interested in partnering with me on the album that I had always dreamt of making. Two, it would have to feel festive and urgent. And three, I instantly knew it would be called G I R L. I hope you like it.”

Pharrell is currently in London, where he will perform “Happy” at the BRIT Awards this evening, and on Sunday, March 2, Pharrell is slated to perform the song on the 86th Annual Academy Awards. Pharrell will also perform on Germany’s Wetten Das and France’s Le Grand Journal later this month. This past Sunday, Pharrell kicked off the NBA All-Star Game with an incredible retrospective performance of some of his greatest hits.

“Happy,” which was first featured on Despicable Me 2 (Original Motion Picture Soundtrack), has become an international phenomenon and radio smash. Currently #1 on the iTunes’ Songs chart in the U.S., the song has topped the chart in more than 175 countries, selling more than 2.3 million downloads worldwide. In addition to jumping to #2 on the Billboard Hot 100 this week, “Happy” has also become the highest-charting Oscar-nominated song in more than a decade. With more than 120 million in audience, the song is currently charting at seven U.S. radio formats—Top 40, Rhythm, AC, Hot AC, Urban, Urban AC, and AAA. Around the world, “Happy” tops radio charts in 14 countries including Australia, France, Germany, U.K., Belgium, Denmark, Hungary, Ireland, Italy, Netherlands, New Zealand, South Africa, Switzerland, and Poland.