Streaming continued to show significant growth in 2014, with over 164 billion songs streamed on-demand through audio and video platforms. Physical album sales declined, with weakness in CDs despite record-setting strength in Vinyl LPs. Digital Albums and Digital Tracks also showed declines versus 2013, although digital consumption overall (sales and streams) showed growth. Total consumption for the year, based on Albums plus Track Equivalent Albums and Streaming Equivalent Albums, was down slightly versus 2013.

“Music fans continue to consume music through on-demand streaming services at record levels, helping to offset some of the weakness that we see in sales,” says David Bakula, SVP Industry Insights, Nielsen. “The continued expansion of digital music consumption is encouraging, as is the continued record setting growth that we are seeing in vinyl LP sales.”

Nielsen provides music research and monitoring services for the entertainment industry. Nielsen’s airplay, sales and streaming data represents music consumers of all ethnicities and languages, and is featured weekly in Billboard’s charts, including the iconic Billboard Hot 100 and Billboard 200, and is widely cited as the standard for music measurement. See entire report here 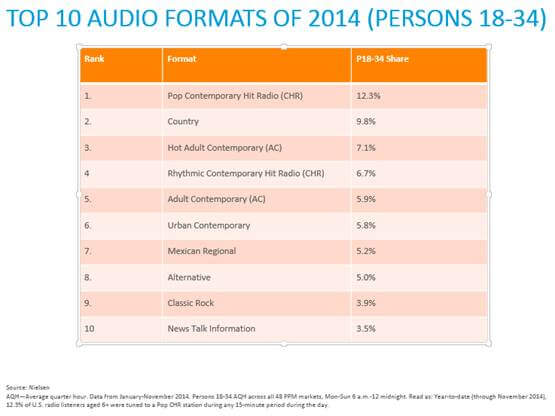 Darryl LittletonMarch 29, 2021September 18, 2022
March 29, 2021September 18, 2022
FacebookTwitterInstagramYoutube
We use cookies on our website to give you the most relevant experience by remembering your preferences and repeat visits. By clicking “Accept”, you consent to the use of ALL the cookies.
Do not sell my personal information.
Cookie SettingsAccept
Manage consent