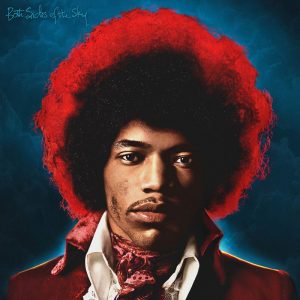 Out today is possibly the final Jimi Hendrix album; Both Sides of the Sky. The album features thirteen tracks, 10 of which have never before been released. As of now It is the last collection of unreleased studio recordings from Hendrix. Unless there are a few gems hidden away in a secret studio, the world won’t hear any more new studio music from Jimi.This release collects music from Hendrix’s final years in studios around New York City. Both Sides of the Sky is the third part of a trilogy intended to showcase the best remaining unused recordings in Hexdrix’s archive. This trilogy began with the album Valleys Of Neptune in 2010 and People, Hell, And Angels in 2013. The company Experience Hendrix has been restoring and overseeing the legend’s catalog since 1997. John McDermott, one of the albums producers, explains that with this final project they planned to go out in a spectacular fashion.“Since Experience Hendrix began its restoration of the Jimi Hendrix music catalog in 1997, our goal has been to present these important recordings to Jimi’s fans in the best possible quality. We are excited about achieving that. We’ve also been intent on generating album releases which present this amazing music in its proper context.”Most of the music on Both Sides of the Sky was incomplete by Hendrix’s standards at his time of death. But his collaborators point to many incidents of brilliance throughout these new tracks. Engineer Eddie Kramer points out a specific moment on the song “Cherokee Mist.” “At the very end, there’s that incredible sound that he’s getting out of his amplifier. It just sounds like a beast that got loose in the studio. It’s primitive and wonderful.”Both Sides of the Sky is available now where ever you stream, download or buy music.