Veteran music writer A. Scott Galloway posted the news on FaceBook yesterday that Raymond Jones: Composer, Producer, Keyboardist, Musical Director, Poet, Babysitter, Provacateur, Visionary, Doer, Brother, Friend had passed. No details were given on Jones' death except that he had been ill.Galloway stated: “I lost a very special cat today: Raymond Jones. Blessed to have shared priceless moments as a friend, fan, project partner, artist/journalist and mutual admirer of Music's Global Masters. He challenged me with his BIG ideas, welcomed me into his home, played his piano just for me. Gonna miss his rants. He deserved better than what was returned him…”RAYMOND JONES' BIO (below)RAYMOND JONES is a musician, composer, writer, producer, recording artist and engineer.Born and raised in NYC, RAYMOND began his professional career in high school. He performed with Latin groups in the NYC area learning the traditional Latin styles of music. “The clave (Latin pulse) is in everything I do musically. I can't go against clave to this day,” RAYMOND insists.(pictured below: Raymond Jones with former band mates from Chic: Alfa Anderson and Norma Jean Wright 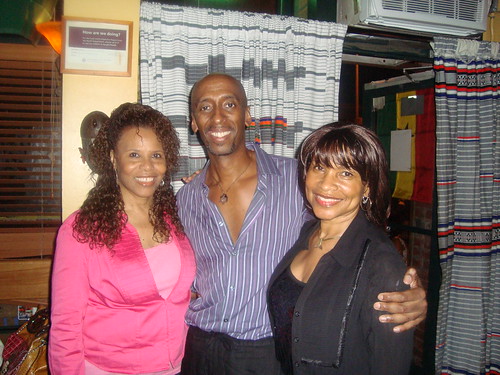 Continuing his private studies throughout his formative years, RAYMOND worked with local dance and Jazz groups. His big break came when his friend TONY THOMPSON introduced him to NILE ROGERS and BERNARD EDWARDS who were forming the band CHIC. At age 19, RAYMOND joined the band, touring the world and playing on hit records such as GOOD TIMES, SISTER SLEDGE'S “WE ARE FAMILY”, and DIANA ROSS' “UPSIDE DOWN” among many others.Eventually RAYMOND was called to perform and record with progressive rock artist NONA HENDRYX. That led to RAYMOND'S touring and recording with the TALKING HEADS and TOM TOM CLUB. Calls came from CHAKA KHAN, DENISE WILLIAMS & JEFFREY OSBORNE for whom RAYMOND led his band and wrote the hits STAY WITH ME TONIGHT and THE BORDERLINES.Producer GEORGE DUKE invited RAYMOND to move to Los Angeles to work under his guidance as a music producer for artists such as STEPHANIE MILLS & ANGELA BOFILL among others.RAYMOND began to work on film projects such as LITTLE DRUMMER GIRL & SPLASH. Eventually RAYMOND JONES and SPIKE LEE met one another. They have subsequently worked together on five films SCHOOL DAZE, DO THE RIGHT THING, CLOCKERS, MO BETTER BLUES and GET ON THE BUS.He has written songs for the likes of WHITNEY HOUSTON & PATTI LABELLE among many others.In the late eighties to 1993, RAYMOND and former CHIC vocalist NORMA JEAN WRIGHT came together to create a group called STATE OF ART. They subsequently recorded one single for Polydor Records and a critically acclaimed CD for SPIKE LEE'S newly formed FORTY ACRES AND A MULE MUSIC WORKS. Although the group stopped recording in 1993, NORMA and RAYMOND remain close friends and continue collaborating on musical projects.In 1997, RAYMOND recorded his first solo CD ACTS OF LOVE for the independent label UEG. Shortly after its release, he agreed to take a position from July of 1997 to March of 1998, as music director for the KEENEN IVORY WAYANS late night talk show (broadcast on the FOX network nationwide), running the all female band and scoring music for the show's daily requirements. Working 10-12 hours a day for the show, RAYMOND was unable to begin work on his second CD NAKED SOUL until April of 1998, a month after the show ended. NAKED SOUL was released in 1999 and has been warmly received by RAYMOND'S audience.In 2001, RAYMOND released his third solo CD INTMATE which has garnered rave reviews. INTIMATE was conceived as a song cycle about the nature of intimate relationships. In the fall of 2002, he also released his holiday single, CHRISTMAS BLUE (featuring Vocalist Alexx Daye) and a solo piano version of THE FIRST NOEL.In late 2002, RAYMOND was approached by SPIKE LEE again. This time, to write lyrics for a commercial for PEPSI featuring BEYONCE KNOWLES singing the praises of the soft drink. The commercial first aired on March 23rd 2003 on the ACADEMY AWARDS program on ABC (in the US). Also that year, RAYMOND put together and led a band for rapper DMX featuring his friend, TONY THOMPSON (who passed away in November 2003). Unfortunately, DMX's plans to perform with the unit did not materialize as he had planned, but there is recorded documentation of this powerful unit in DMX's camp.Also in 2003, RAYMOND provided the musical score for the hilarious independent film, WASABI TUNA. RAYMOND also produced the lead single from the film entitled COOCHIE POWER featuring ALEXIS ARQUETTE.In 2004, RAYMOND released his first solo piano CD, SO AMAZING (SONGS FROM THE LUTHER VANDROSS SONGBOOK). A moving tribute to his friend of many years (the two worked together in the group CHIC). Also In 2004, JONES attended the premiere of his first ballet commission MOVE for the Deeply Rooted ballet company in Chicago. JONES composed the second movement of the multi movement piece which was performed in New York as well as Chicago.After a relocation to Atlanta in 2005, JONES released HILLSIDE STORIES in September 2007. Its his fifth CD project and harkens back to a time of political and social awareness in Black Music. With titles such as Blood, One Man Dead and Misled, it provokes the listener to think as well as enjoy.2008 found Jones arranging and producing music for the film SOUL MEN featuring Samuel L. Jackson and the late Bernie Mac as retired background (soul) singers. Also featured in the film are John Legend and Sharon Leal (Dreamgirls). Jones produced tracks and vocals featuring all of the aforementioned performers.RAYMOND JONES continues to be a musician without boundaries.

The Rickey Smiley Morning Show Discusses LaLa Anthony Educating Her Son About How to Treat a Black Woman: “Sometimes it Takes a Queen to...

Rickey Smiley Discusses Sasha Obama Getting Dragged on Social Media For Wearing Expensive Bag Made by Black Designer: “People are Starving And Crying For...

Probation Officer murdered and her corpse defiled by a homeless man

Ebro in the Morning and Ben Crump Discusses how the Menthol Ban Would Affect the Black Community, and More (VIDEO)