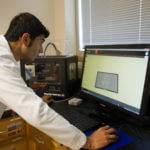 BALTIMORE — Morgan State University’s (MSU’s) School of Computer, Mathematical and Natural Sciences (SCMNS) has announced the receipt of four federal grants totaling more than $1.2 million, awarded in the spring and summer of 2020. The funds are supporting important research in science, technology, engineering and mathematics (STEM) fields ranging from pharmatechnology to advanced computing to meteorology to computer science instruction. Collectively, the grants indicate steady progress toward Morgan’s goal of attaining an R1 (“very high research”) designation from the Carnegie Classification of Institutions of Higher Education. MSU was elevated to an R2 (“high research”) Carnegie classification in December 2018.

“Receiving four grants by four different faculty members testifies to the quality of the faculty and their devotion to the research and education mission of the University,” said Hongtao Yu, Ph.D., dean of Morgan’s SCMNS. “All four faculty members are relatively new to the University, and I am so proud to see them having a great start at Morgan.”