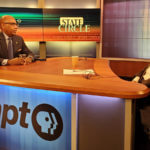 OWINGS MILLS, MD – Maryland Public Television (MPT) and Morgan State University’s WEAA-FM (88.9) are collaborating on Monday, October 26 at 8 p.m. for MLK Speaks: A Conversation with America, a three-hour broadcast structured around an interview from June 9, 1963 between Martin Luther King, Jr. and TV personality David Susskind.  The landmark two-hour interview has not been seen in its entirety since its original airing 57 years ago. The program begins with discussions featuring students, historians, educators, and journalists about the relevance of Dr. King’s words today, which — as in 1963 — is a time of significant political and racial unrest. 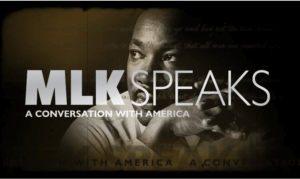 The special broadcast event, available statewide on MPT and on WEAA-FM in the Baltimore area, will be co-hosted by Dr. Karsonya (Kaye) Wise Whitehead, host of WEAA’s “Today with Dr. Kaye” and MPT’s news team of anchor Jeff Salkin and senior correspondent Charles Robinson.

The program will also be available for viewing the evening of October 26 and afterward on the MPT website at mpt.org/mlkspeaks/.

Appearing on the program are:

This simulcast is the first collaboration of a recently launched partnership between MPT and Morgan State University’s School of Global Journalism & Communication (SGJC).

“This partnership with MPT connects the university to a barrier-breaking, regional multimedia public broadcasting service that shares our commitment to diversity in storytelling and to diversity among the people who tell those stories. This is especially important during this period of urban unrest,” explains DeWayne Wickham, the SGJC’s founding dean and a founder of the National Association of Black Journalists.

“We’ve established partnerships with some of the nation’s leading universities and media organizations to allow our faculty and students to play a meaningful role in eradicating news deserts that disproportionately impact African Americans and in ensuring that voices of people of color are heard above the din of our national discourse,” says Wickham.

MPT launched its Standing Against Racism: Fostering Unity Through Dialogue initiative in June following the death of George Floyd. The initiative’s purpose is to increase thoughtful discussion and understanding of race-related issues in communities across Maryland. Among the ways this is being accomplished is by providing viewers thought-provoking prime-time programs, offering expanded public affairs coverage and town hall forums on social media, and hosting virtual program screenings and discussions with the community through the network’s “Conversations for Change” series.

“MPT will sustain this initiative over an extended time period, not merely while protests in U.S. cities lead news reports on TV and radio,” explains Larry Unger, MPT president and CEO. “Morgan State University, one of the nation’s premier public urban research institutions, and WEAA-FM, among the nation’s most respected public radio stations, are ideal partners to help us achieve the goal of fostering deeper discourse on race relations in our communities.”

“Every successful academic institution has a strong understanding of, and connections to, mediums of mass communication in the community it serves. This partnership with MPT merges our desire to provide meaningful, experiential learning opportunities to students with our desire to showcase the knowledge and capabilities of our outstanding faculty and staff,” says Morgan State President David K. Wilson.

MPT’s principal manager of this partnership is Travis E. Mitchell, a Morgan State alumnus who in February was named senior vice president and chief content officer. “I see this collaboration with SGJC as the beginning of a series of important engagements we will undertake to address systemic issues confronting our region and nation,” says Mitchell.  “Morgan opened up the world of journalism to me while I was editor of its student newspaper, The Spokesman. I believe our partnership will develop a new generation of gatekeepers and strengthen MPT’s position as one of public television’s leading sources of programming that reflects this nation’s diversity.”

Maryland Public Television (MPT) is a statewide, public-supported TV network and Public Broadcasting Service member offering entertaining, educational, and inspiring content delivered by traditional broadcasting and streaming on TVs, computers, and mobile devices. A state agency, it operates under the auspices of the Maryland Public Broadcasting Commission. MPT creates local, regional, and national content and is a frequent winner of regional Emmy® awards.  MPT’s commitment to educators, parents, caregivers, and learners of all ages is delivered through instructional events and Thinkport.org. MPT’s year-round community engagement activities connect viewers with resources on a wide range of topics.  For more information visit mpt.org.

Morgan State University, founded in 1867, is a Carnegie-classified doctoral research institution offering more than 126 academic programs leading to degrees from the baccalaureate to the doctorate. As Maryland’s Preeminent Public Urban Research University, Morgan serves a multiethnic and multiracial student body and seeks to ensure that the doors of higher education are opened as wide as possible to as many as possible. For more information about Morgan State University, visit www.morgan.edu.