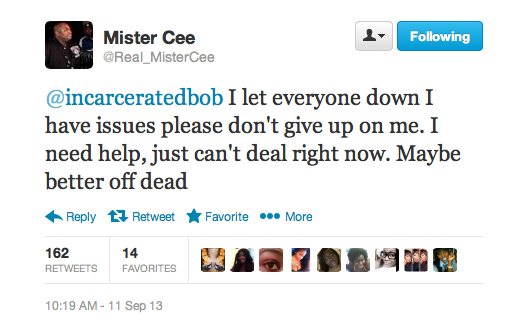 Yesterday, after the news broke, Mister Cee posted  what appeared to be a tweet that was laced with shame, guilt and self blame for his deemed unacceptable sexuality and desire for “trannies” or Drag Queens.  ironically, it appears that Mister Cee being gay is not the pun of jokes as much as the attraction to Drag Queens. Yet there are still vicious attacks on him as a person in many of the comments on various sites especially from the 18-24 target.

In a tweet sent out yesterday, Mister Cee expressed severe depression linked with the possibility of suicide (see tweet). As this is my course of study, this man is screaming for help as people constantly ask the same question, why doesn’t he just come out especially at this point after being busted so many times and now being betrayed and recorded by a drag queen claiming not to be a prostitute (but it’s hard to convince a jury that wasn’t the case from the audio) The drag queen is obviously enjoying the outing and the 15 minutes of massive YouTube fame at the cost of destroying a man’s entire career. Some might say Cee destroyed his own career and I’m inclined to agree that he certainly played a part but there are no winners in this unfortunate situation.

The question of why he won’t come out after being busted so many times is outrageously apparent from his tweet; he is extremely ashamed. Now he is ashamed, humiliated and unemployed. Mister Cee doesn’t need help and he doesn’t have issues he is human and while we may not all do the same things none of us are perfect. Is anyone reading this perfect? When you hide who you TRULY are, it comes out in the worst ways. Several major black celebrities have literally DIED because they were conflicted about their sexuality and the cost of coming out to the black community. It literally destroyed them while black people phucked and danced to their music.

Mister Cee is not the only gay or bisexual black man or woman in the music industry, in radio, the DJ arena or the stage. There are several black gay, lesbian and bisexual people who work in the entire industry and in the urban industry, I know several of them personally and so do you, you just don’t know they are gay or bisexual, then again, maybe you do but I won’t reveal who they are.  In the black community, we hail you then nail you. They want you to be who you are then when you do it, they categorize, discriminate and attack you for it, O Joy, great options. 2o years ago in the industry Mister Cee would have been laughed off the industry planet if  he was out he would never have had the career and legacy he has now. He HAD to make a sacrifice like many of us have in various ways to simply keep working. The support system for someone like him was non existent and on the black industry side to a large extent it still is even ironically from gay industry people who fear affiliations with other gays will reveal who they are.  Mister Cee was not going to get support if he was out from Radio, his family probably had some reservations, the black church? There is no need to even go into that so where was he going to get it? At least now he can strart over without the station’s reputation looming over his head and finally be who he is and come to terms with it but it’s his choice. The line nevertheless has been clearly defined if he doesn’t come to terms with it. One thing’s for sure, his legacy is undeniable and it’s etched so it’s time to proceed forth. We wish him luck and hope that he does not continue to do what our community has taught him to do… hate himself. We don’t get the advantage of hating and berating a child then blaming them for their own self hatred when they grow up because they got the message.

This article is a joke.” The drag queen is obviously enjoying the outing and the 15 minutes of massive YouTube fame at the cost of destroying a man’s entire career.”

This is his fourth bust. The drag queens did not do anything to him. Give me a break. He needs help – bottom line.