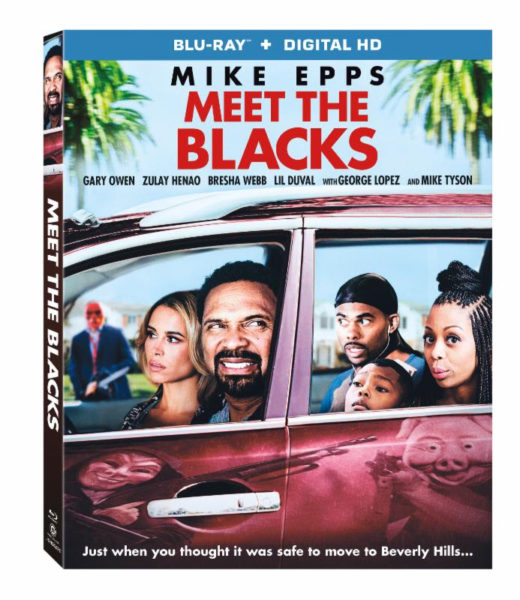 Beverly Hills isn’t all that it’s cracked up to be in Meet the Blacks, now on Blu-ray (plus Digital HD), DVD (plus Digital), Digital HD, and On Demand from Lionsgate and Codeblack Films. When Carl Black comes into some unexpected money, he decides to give up his hustling lifestyle, take his family and leave Chicago behind, but…they realize they picked the worst time to move.The laugh-out-loud cast includes Mike Epps (The Hangover), Gary Owen (Ride Along), Zulay Henao (The Single Moms Club), Bresha Webb (Ride Along 2), Lil Duval (“BET’s “ComicView”), Andrew Bachelor (Fifty Shades of Black,), DeRay Davis (21 Jump Street), with George Lopez (TV’s “George Lopez”) and Mike Tyson (The Hangover).
In a send-up of the hit franchise The Purge, Carl Black moves his family to Beverly Hills in hope of a better life, but their arrival coincides with the city’s annual purge, where all crime is legal for twelve hours.
The home entertainment release of Meet the Blacks includes two behind-the-scenes featurettes, the “Hit the Gas” music video, “Don’t Hate Wiring” parody commercial, and outtakes. Meet the Blacks is now available on Blu-ray and DVD for the suggested retail price of $24.99 and $19.98, respectively.
BLU-RAY/DVD SPECIAL FEATURES*
“The Making of Meet the Blacks” Featurette
“Hit the Gas” Music Video
Behind the Scenes of “Hit the Gas”
“Don’t Hate Wiring!” Parody Commercial
Outtakes
*Subject to change