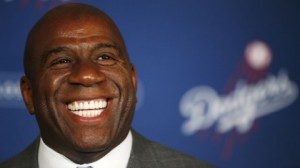 Let’s face it, there are not many black men who are legends in their own time. Especially THREE times. Magic Johnson is a pioneer and a revolutionary in sports, with HIV and now accepting and loving his gay son.In this interview with Harvey from TMZ, Magic expresses his love for his son and the vicious comments, mostly on black blogs against EJ. Most of us know that many black people look at gay people as damaged goods but black gay people are also looked at as traitors by black men.The black church has played the greatest role in the discrimination of black gay people by teaching members to hate gays even to the point of hypocrisy but something that is missing in our history books could also be a link, is it possible that black men were used as sex toys and were rape victims during the slave trade like black women were?Bishops like Eddie Long who have expressed his disdain for gays but has also been accused, sued and quietly settled with five (or more) young black men that he took on trips with him where sexual trysts were involved are exles of the hypocrisy.   The black community’s adamant disdain for gays is the reason that DL culture, even disguised as disdain (Eddie Long) exists. Anyone who would “choose” a life of being ostracized, ignored and rejected by their community would be an idiot. That concept is about as ridiculous as racism being over because we have a black president. When you train people to be ashamed of themselves in any way from birth, they hide. That’s not a “choice” it’s “conditioning.”   Harvey makes mention several times about the black community’s disdain for gay people during this interview and Magic addresses each question. In ethnic cultures men are humiliated when their sons are gay and they take it as a direct hit on their own perceived masculinity even when it lacks parental responsibility. All kids need love and support be they straight, gay, gifted, handicapped or retarded.   With all that in mind it was an incredibly brave move…. INCREDIBLY BRAVE for Magic to step up to the plate and not only be a black father to his black children but to make history (once again) with the supremely unselfish act of casting his own stellar legacy aside to be a loving father to his gay son. What an amazing human being. KUDOS to Magic and EJ. (see the video interview click “Next” above or below)