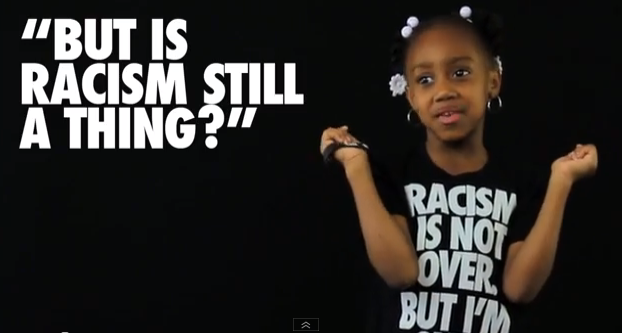 It’s been exactly one month since officer Darren Wilson shot unarmed teen, Michael Brown. Despite evidence of several inconsistencies between his alleged story and multiple accounts by witnesses, the officer has not yet been charged or arrested. The streets of Ferguson have cleared but the fight continues on for those who believe justice has not been served. Michael Brown’s parents, family, and friends still mourn the unfortunate death of their loved one with no real sense of closure.Opinions about the situation are still cluttering social media space and news feeds with many people supporting Michael Brown and a multitude of others supporting officer Darren Wilson. There have been campaigns set up to raise money on both sides of the table but there hasn’t been any campaign we have witnessed quite like this “Hey White People” campaign delivered by the kids of Ferguson courtesy of FCKH8.com.This video addresses  racism in a way that is often ignored but it’s done is such a amazingly humorous way through the use of powerful statistics, these charismatic children, and a few quotes many of us have used or heard before.  They do it in such a whimsical way that only children could pull off that you can’t help but to pay attention. Watch the video to see what we mean.[youtube https://www.youtube.com/watch?v=KQfg52m0-4o&w=640&h=360]Quotes from “Hey White People”:“We just want an equal shot in life, not to be shot to death.”“Just because Beyoncé is on your playlist and you voted for Obama, doesn’t mean that our generation has seen the end of racist drama.”“Employers don’t even have to see the color of our skin for the discrimination to begin. Resumes with ‘black sounding’ names like Tanisha and Tyron are 50% less likely to get called in for a job interview than the exact same resumes with white sounding names.”Kid Mocking White Person: “Some of my best friends are black.” Kid Sarcastically Holding Cookie: “You get a cookie!”Video producer Marcus Kon comments, “We wanted to give a voice to kids from Ferguson who have to grow up facing racism that most white people do not want to acknowledge still exists. It’s a wake up call for America from racism’s new ground zero.” He added, “All of the children featured in the video were auditioned and cast right there on the sidewalk next to where Mike Brown was gunned down. This could have been any one of them. Working with the kids and their parents, some of whom saw the shooting with their own eyes, was emotional and powerful and it all comes across in the video.”Video director Luke Montgomery offered, “Some white people may be uncomfortable with the blunt tone of how these articulate and adorable Ferguson kids point out the racism they still face at the hands of white people. As a white guy myself, I’m OK with that.” He added, “If they think hearing about racism is difficult, they should try being black and living in America. Us white people need to erase it, and the first step is to own up and face it.”