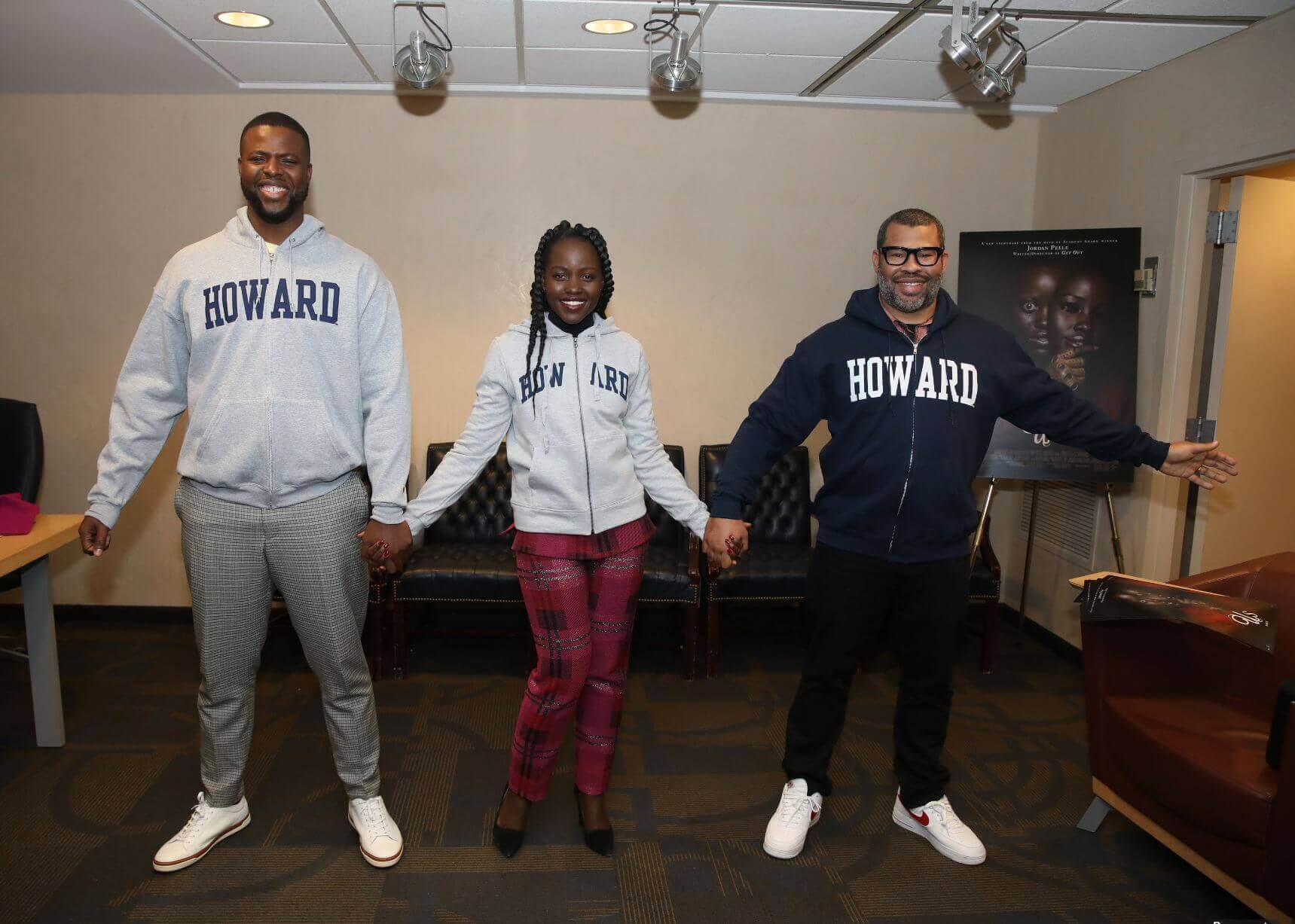 WASHINGTON, D. C. (March 22, 2019) — A private screening of “Us,” featuring special appearances by stars Lupita Nyong’o and Winston Duke and writer-director Jordan Peele, sent shockwaves of excitement though a campus audience on Wednesday.

Howard and HBCU enthusiasm for the film started to build in December when the first “Us” trailer pictured Duke sporting a grey sweatshirt with “Howard” emblazoned on it. Peele, addressing student questions after the screening, said he uses symbolism in movies to disrupt conventional images of African Americans.

“It starts breaking down the boxes we are relegated to,” Peele told students. “Howard is dope. Howard is iconic. It’s one of these things that pops and represents on film.”

“Us” is a horror film set in the present day along the Northern California coastline. It stars Nyong’o as Adelaide, a woman returning to her beachside childhood home with her husband, Gabe (Winston Duke), and their two children (Shahadi Wright Joseph, Evan Alex) for an idyllic summer getaway.

Adelaide is haunted by an unexplainable and unresolved trauma from her past and compounded by a string of eerie coincidences. She grows increasingly certain that something bad is going to befall her family. And then it does.

“All the accolades afforded me the gift of choice,” said Nyong’o, the seventh Black woman and first Black African to win an Academy Award for acting. “The stars aligned for me to have my first lead role with Jordan Peele. He’s tackling issues so intrinsic to the human experience and he’s doing so with swag.”

Duke told Essense that his character’s alma mater and paraphernalia choice was intentional after having a conversation with Peele. He said the alma mater symbolized the family’s attachment to Blackness. At the Howard screening, Duke also said he sought to add complexity to his role as a Black male.

“That’s the thing,” Duke said. “We were flipping a lot of things. [Gabe] is not your typical Black male in cinema. He can be sexy and he can be funny – so many things at once and self-defining.”

“It was more relatable than a typical horror film,” said Tiyi Christopher, a senior studying maternal child health. “We are a little more detached to those because there is not much Black representation.”

Akinyemi Green, an economics sophomore, had a similar reaction. “I liked how the female Black role was the main driving point. This is a great opportunity for inspiration,” he said.

The 2017 release of “Get Out” made Peele the third person to earn best picture, director and screenplay nominations for a debut film, and the first Black winner for best original screenplay.

Peele pledged to continue to put forward work centered on Black people, even when the dominant themes are not as strongly race-related as in “Get Out.”

“When I made this move I felt a certain obligation to make a movie where Black people are the center of it and it’s not about race – because I could,” he said.

Radio Facts - May 26, 2020 0
The four police officers involved in the murder of George Floyd have been fired after one of the officers used excessive force by putting the entire weight of his body on Floyd while arresting him with his knee on his neck. The FBI is also investigating it as a criminal matter as well.

Editorial: “Karen” Fired from Job for Lying to Police About a...