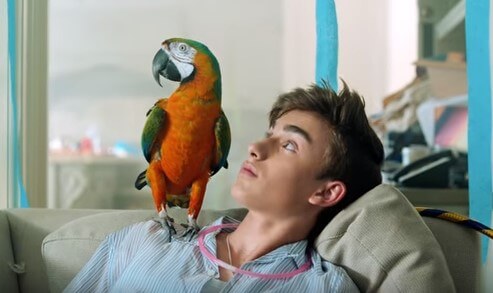 Radio Factshttps://radiofacts.com
Johnny Orlando releases the video for his new single and anti-party track “All These Parties” via Island Records. The video was directed by video producer/director, Alex P Smith and sees Orlando in the thick of the aftermath of a raging house party. Orlando is seen cleaning up at the beginning of the vid, but as the track progresses, he ends up only contributing to the mess as he parties alone with his parrot. The most colorful shots include Johnny diving into a pool filled with solo cups and tossing an entire cake on the ground. The “All These Parties” single was released on September 20th and has already gained over 2 million streams to-date.On filming, Orlando says: “This was hands down the most fun I have ever had shooting a music video. We basically just got to have a big party on set, which definitely comes across in the video. We even had a parrot and a giant snake…it was crazy.”

Radio Facts - January 18, 2021 0
Written By Darryl LittletonOn January 20, 2021, Kamala Harris will be sworn in as Vice-President of the United States.  One day the fact she’s a woman will not even move the Richter scale, but right now this news is monumental.   She is the first woman in America’s 244-year history to hold this title.  Not only is it a demolition of the glass ceiling for women, but in Harris’ case it means so much more.

STRETCH AND BOBBITO + THE M19’S BAND RELEASE NEW ALBUM NO...