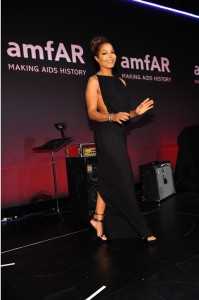 As part of fast approaching 2013 New York Fashion Week, recording artist and actress Janet Jackson was honored yesterday for her contributions to the fight against AIDS. amfAR is an international non-profit organization dedicated to the support of AIDS research & Hiv prevention.Jackson, who is also an ambassador of the organization, is the only artist in history to have Grammy nominations spanning the Dance, Pop, Rap, Rock, and R&categories. Other guests at the black tie include John Legend and Harry Belafonte. CeeLo Green performed at the conclusion of the event.Jackson, 46, recently made headlines with the announcement of her engagement to Wissam Al Mana, 37. The pair are said to be planning a $20 million wedding in the Middle East this spring.