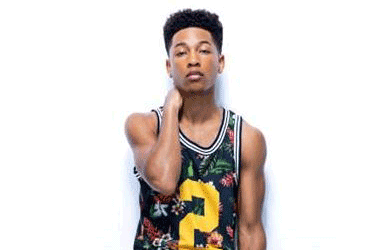 (Los Angeles, CA) – Jacob Latimore premieres the video for his new single “Heartbreak Heard Around the World”, the video can now be viewed across Vevo. Check out the video here. The video concept which was inspired by the film “Jumper” and directed by Erik White was shot in Los Angeles. The single “Heartbreak Heard Around the World” features T-Pain and is available on iTunes now. “Heartbreak Heard Around the World” is produced by Martin Johnson, Shea Taylor and written by Martin Johnson, Shea Taylor and Johntá Austin.
Jacob will be seen in the upcoming FOX film “The Maze Runner,” based on the popular Young Adult Novels “The Maze Runner,” due out later this year. Jacob also had a starring role in the Fox Searchlight film “Black Nativity alongside Jennifer Hudson, Angela, Bassett, Forest Whitaker and Tyrese Gibson, which was released in theater November of last year.
A true triple threat, 17-year old Jacob Latimore is currently in the studio working on his debut RCA Records / Crown World Entertainment album. In 2012, Jacob released “Like ‘Em All” remix feat. Issa which peaked at #1 on BET’s 106 & Park, as well as a different version of “Like ‘Em All” which featured Diggy Simmons and catapulted Jacob into the spotlight. His single “Nothing On Me,” featured an epic Jacob vs. Jacob dance battle in a widely viewed video that garnered millions of online hits. Jacob has been nominated for The bet Awards’ “YoungStars Award” for the past 3 years.

Radio FactsJanuary 16, 2013September 18, 2022
January 16, 2013September 18, 2022
FacebookTwitterInstagramYoutube
We use cookies on our website to give you the most relevant experience by remembering your preferences and repeat visits. By clicking “Accept”, you consent to the use of ALL the cookies.
Do not sell my personal information.
Cookie SettingsAccept
Manage consent