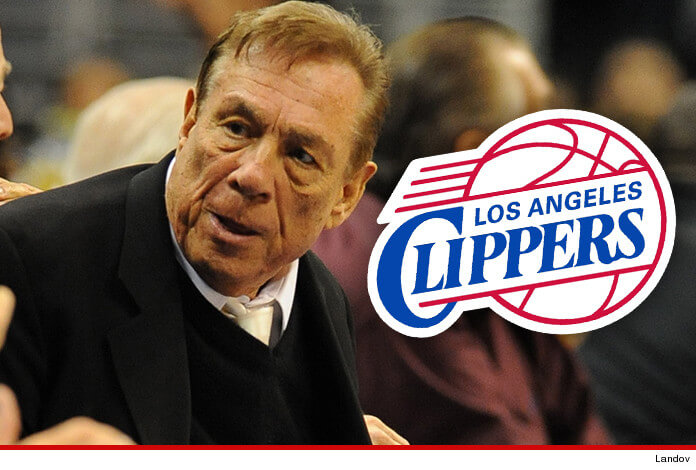 Let’s face it, all white people may not be racist but it certainly appears Donald Sterling is but how can he be racist (according to his grand Hair Club-ness)? He has black people working for him doesn’t he? Shame on you and your thoughts! Perhaps it is YOU that are the racists? Clippers owner Donald Sterling is stating the audio tape that has now made the international rounds (knocking the Mimi and Nikko sex tape out of the number one position) is inaccurate. We would like to take THIS time to thank Mr. Sterling for not ALSO doing a sex tape as it would be very difficult to be upset about his racist rant and hurling up a lung at the same time.

The audio that portrays Sterling as a mere, everyday, run-of-the-mill happy and rich racist slave owner has been doctored he states and the Cotton Pickin’ Clippers organization is right behind him, preparing tonight’s Fried Chicken, Watermelon Cobbler and Chitlin’ wine, Yesim’. He says his conversation does NOT reflect his views toward African Americans …. we are now trying to calculate that equation, hold on….OK perhaps he is not aware that he was um, well, we don’t know…. TALKING? In addition, we are sure he meant “Business” views of African Americans cause dem der Negra slave species can sho nuff play! Just a keep dem side-scratchin’ banana eaten’ Apes away from me and my wench when the games are over cause they need to be back in that cage dammit, what do we build prisons for?  Is there a problem, it’s not illegal is it? . In our best Paula Deen impersonation we’d like to say “Ooo Wee y’all!”  in addition, if you believe Sterling’s denial, here’s another one for you… Rumplestilskin was arrested over the weekend for having a meth lab in his apartment that was patrolled by the 7 Dwarfs while he dated his disabled baby mama, Alice in Wonderland. Miss Wonderland was also arrested for twerking off beat.

Anyone who has worked in the industry with a good ear can hear edited audio and after listening to the tape there are some questionable areas.  It appears Sterling was choosing his words carefully like he didn’t trust this house wench and that he really does have a issue with black people, half his girlfriend and her having black friends. She failed to explain that she needed those friends to talk her out of suicide after she had sex with him. Black friends? He keeps insisting “You don’t understand THE CULTURE” why didn’t she understand he was talking about plain ole RACIST culture? Was it that hard to comprehend? Just don’t tell people that you are half black and everything will be fine… he begged.

Why does this remind us of the racist slave owner that has sex with the black slaves (obviously against their ABSOLUTE will) and he has the other slaves working on the court (Ooops, we mean) FIELD then states he is NOT racist because of it? Let’s see, if I am white and I have skilled black people working for me to make me rich that would CERTAINLY not make me a racist it would make me a Wal-Mart CEO.  I mean, I’m giving them work.. aren’t I?  I’m keeping them off welfare and off the streets aren’t I? What say you? Nevertheless, wouldn’t that be the worst KIND of racist?  He did not want his house wench oops, we mean EMPLOYEE, oops, we mean GIRLFRIEND posting pictures or as the senior gangbangers say posting pictures on “THE Instagram” with black people INCLUDING Magic Johnson because people were talking and telling him about it and he was obviously ashamed? But he seems to always feel better when he deposits his checks, go figure. Should he not be MORE upset with the person that sewed in that Trump wiglet? What kind of people is this man surrounding himself with should be the next question on everyone’s mind, Paula Deen and other modern-day gimme-that-collard-green-recipe Slavists?  Does he carry a small bottle of industrial strength anti-bacterial solution in his wig whenever he shakes hands with a black person? He doesn’t understand why his simple request to not HANG (for the lack of a better word) with the ball bounin’ Negras or claiming her half-Negracy is asking too much?  Why can’t she just be a good wench and serve her master well? Perhaps she just did.   Check out this audio, is this an edit job? Is he being set up. Comment below. (Disclaimer: the entire additions to the story are Kevin’s bits and pieces of dark humor. We not claiming it’s true and reading it may cause head-scratching, cookie-baking and deeper thinking)