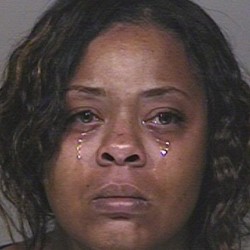 Dumb, Dumber and meet the Dumbest.

Shanesha Taylor could not find a babysitter when she went on a job interview so she left her kids in a hot car in Arizona several months ago. She got busted and millions of people worldwide felt sorry for her and established a fund to help her which totaled $114,000 solely based on her mug shot which showed a young mother in complete despair and without support. Donations poured in as people worldwide felt sorry and pictured themselves in a situation like hers.  She was blessed again when the judge presiding over the case was willing to drop the charges if she put $40,000 of the donation money into trust funds for her children. Simple request? Not quite. She did not comply stating she did not agree with the terms the judge gave her. She also stated that she could not withdraw that amount of money in time before her next appearance in court (anyone with half a brain knows that a lie). She states she has $70,000 left and is having a hard time finding a job because of the case.  Some state that she even went as far as to give $6000 to the baby daddy to help him finish his rap album in the studio.  We don’t doubt she made many new friends when she got that $114,000 but the judge was not impressed. He has since reissued the charges and she is going on trial in a few months.

Could this be the Cheapest Woman on the Planet? (video)