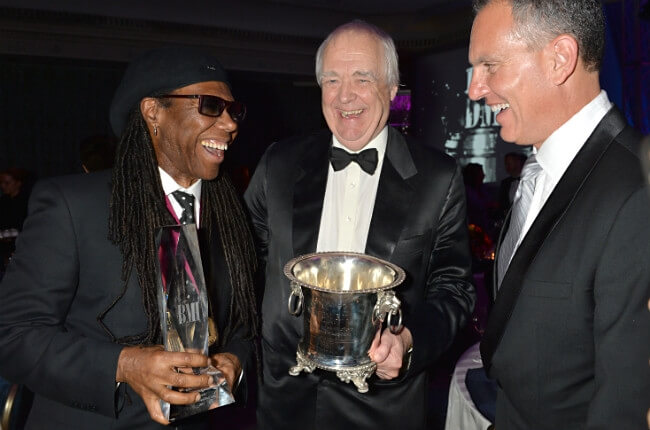 Broadcast Music, Inc., the global leader in music rights management, tonight honored internationally-celebrated lyricist Sir Tim Rice as a BMI Icon at the 2014 BMI London Awards. Music industry guests including Van Morrison, Ray Davies, Don Black and Johnny Quinn (Snow Patrol) filled London’s Dorchester Hotel to celebrate the U.K., European and Caribbean songwriters, producers and publishers of the most-performed songs on United States radio and television in the past year.
Sir Tim Rice was named BMI Icon because of his “unique and indelible influence on generations of music makers” and joins a list of past honorees including John Lydon, Queen, Ray Davies, Don Black, Donovan and Bryan Ferry, among others.
BMI presented Nile Rodgers (BMI) with the Song of the Year Award (The Robert S. Musel Award) for “Get Lucky,” co-written with Thomas Bangalter (PRS/SACEM) and Guy-Manuel de Homem-Christo (PRS/SACEM) of Daft Punk, and Pharrell Williams. This award is given to the most-performed song by UK or European writers in the BMI catalogue on U.S. radio and television over the past twelve months. The track was published by Imagem Music (PRS) and beat stiff competi-tion from Ed Sheeran and Ellie Goulding.
Avicii won the Dance Award for his smash hit “Wake Me Up,” performed with Aloe Blacc and pub-lished by Sony/ATV Music. The song reached Number One in twenty-two countries including Aus-tralia, New Zealand, Hungary, Ireland and the UK. In the UK, the track was the fifth most streamed track of 2013 and spent 32 consecutive weeks in the Top 40.
Throughout the night, BMI honored many British songwriters and co-writers of the most-performed songs on U.S. radio and televison. Emeli Sandé (PRS) earned a pop award for “Next to Me” and for her collaboration with Labrinth on “Beneath Your Beautiful,” as did Wayne Hector for “Best Song Ever” performed by One Direction. Songwriting powerhouse Sacha Skarbeck was cele-brated for the worldwide hit “Wrecking Ball” made famous by Miley Cyrus, as well as Nicky Romero who was honored for “Right Now” performed by Rihanna. Julian Bunetta and John Ryan were honored for “Best Song Ever” and together with Jamie Scott were among the writers hon-ored for “Story of My Life.” Ellie Goulding was a triple winner for her songwriting in “Anything Could Happen,” “Burn,” and “I Need Your Love.” Mike Rosenberg took honors for “Let Her Go.” Previous BMI Icon Van Morrison received the BMI Million-Air Award to honor the eleven million combined radio plays of “Brown Eyed Girl,” now putting it firmly in the Top 10 Songs of All Time on US radio and television, as well as “Have I Told You Lately,” which has had seven million.
Also recognized were composers of the most-watched and highest-grossing television programs and films, along with the legendary songwriters behind classics that have generated more than three million U.S. radio and television performances.
A moving musical tribute to Sir Tim with songs performed by Julian Ovenden with the support from the Urban Voices Collective was a highlight of the evening’s festivities. Ovenden has starred on Broadway and the West End, as well as appeared in the phenomenally successful Downton Ab-bey. Urban Voices Collective is one of the most exciting young choirs in the country and has pre-viously appeared at the Olympic Games Closing Ceremony alongside Take That, George Michael and The Who.