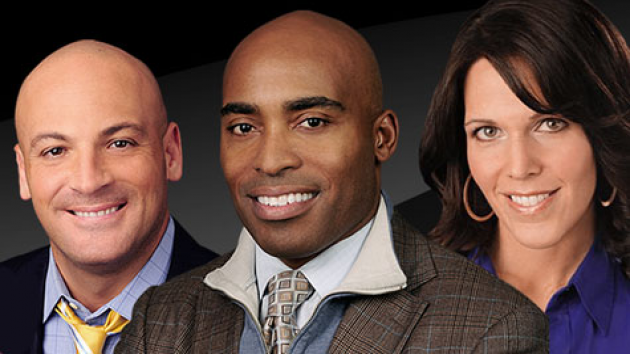 CBS Sports Radio today announced it has launched a live online video simulcast of its national morning show broadcast weekdays from 6:00-9:00a.m. Fans of the popular program hosted by Tiki Barber, Brandon Tierney, and Dana Jacobson, now have the opportunity to watch the trio dissect the top stories of the day and interview the biggest names in sports live online or via a variety of mobile and tablet devices at www.watchtbd.com. A replay of the show will run continuously throughout the day.
A live audio stream of the morning show, which made its debut on January 2, 2013, is also available at www.cbssportsradio.com or via the Radio.com app for mobile devices.
“We are excited to launch yet another way to expose our programming to audiences nationwide,” said Eric Spitz, Director of Programming, CBS Sports Radio. “Tiki, Brandon and Dana prove every day to be dynamic and passionate sports hosts, and providing additional access to the show follows the trend of listeners spending more time with the program.”
Launched on September 4, 2012, CBS Sports Radio offers around-the-clock national sports coverage and programming to more than 300 stations across the country, including stations in all of the Top 10 markets. CBS Sports Radio harnesses the power and resources of CBS RADIO and the award-winning CBS Sports with original programs across multiple weekday and weekend time periods featuring expert sports commentary by experienced broadcasters including Jim Rome, Boomer Esiason, John Feinstein, Doug Gottlieb and Scott Ferrall, among others. Westwood One serves as the exclusive syndicator and sales partner for CBS Sports Radio.