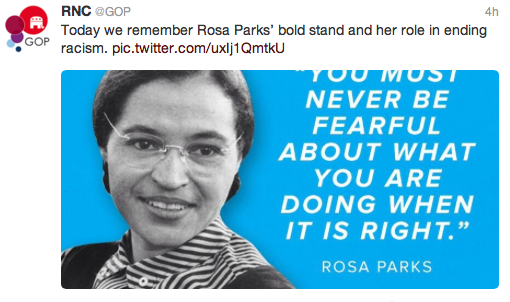 In what was intended to be a nice gesture by honoring civil rights icon, Rosa Parks, the GOP sent out a tweet today that basically indicated that racism was over as indicated in the picture.  After criticism by several outlets and individuals, the GOP later sent out another tweet saying it was a mistake. “Previous tweet should have read “Today we remember Rosa Parks’ bold stand and her role in fighting to end racism.” Even when the GOP seems to try to do something right, they have a way of putting their foot in their mouths or should we say their tweets.
On that note, I have heard this following statement too many times to remember. “We have a Black President now, racism is over.” My response to that is always the same. “UH HUH?”