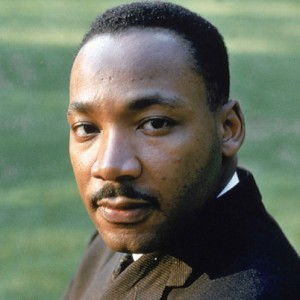 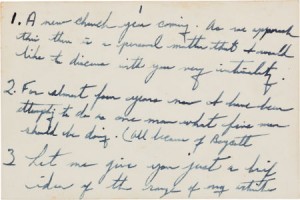 Martin Luther King, Jr.’s handwritten notes, writings and correspondence among important Civil Rights era history at Heritage Auctions
Consigned by King’s personal secretary, Maude Ballou, who worked closely with MLK through the early years of the struggle in the late 1950s; cited by King as a good friend; at auction in New York, Oct. 17; a portion of the proceeds will be donated to Alabama State University
NEW YORK – An unprecedented trove of material relating to the Reverend Dr. Martin Luther King, Jr., the most famous and influential name in America’s storied Civil Rights Movement in the 1950s and 1960s – including King’s handwritten notes on eight cards containing the outline of his famed “Dexter Avenue Church Farewell Address,” circa 1960 – will be offered on Oct. 17 as part of Heritage Auctions’ Signature® Historical Manuscripts event in New York.
The material, more than 100 artifacts in all, are coming to auction after more than half a century in the loving possession of 87-year-old Maude Ballou, Martin Luther King Jr.’s close friend and personal secretary.
“The Ballou material provides a ground-level perspective of the civil rights struggle,” says Sandra Palomino, Director of Historical Manuscripts at Heritage Auctions. “The collection brings to light the courage and strength of all its participants. This material, available for the very first time, is unprecedented and illustrates the role of the church and the Reverend King’s leadership.”
As a child growing up in the South during the 1960s, Howard Ballou, Maude’s son, was privileged to witness history. He was just a boy at the dawn of the Civil Rights Movement.
“When Dr. King was elected to lead the Montgomery Improvement Association, which led to the Montgomery bus boycott, he asked mom to come work with him,” said Howard, 59, a TV news anchor in Jackson, Miss. “She was working at the time for a local radio station. She had a business degree from Southern University in Baton Rouge, LA. She was a great organizer. She got things done. Of course, this was the boycott that changed the world.”
Maude Ballou later helped Dr. King establish his office at the Southern Christian Leadership Conference. Mrs. Ballou moved with King to Atlanta, living with the King family for several months, ensuring a smooth transition before King had time to hire a new secretary.
As King’s secretary, Ballou handled his schedule, wrote letters on his behalf, and received correspondence from King and other civil rights leaders.
“Maude Ballou communicated with all the great leaders of the day,” said Palomino. “Rosa Parks, Adam Clayton Powell, Ralph Abernethy, Wyatt Tee Walker, you name it. She worked closely with Dr. King in all of his writing and editing.”
“These are treasures from my mom’s years at the beginning of the civil rights movement,” said Howard. “My mother has finally decided that, after half a century safeguarding this material, and Dr. King’s legacy, she wants to share these items with the public. It’s time for them to be appreciated by others as much as we’ve appreciated them.”
Heritage Auctions will be donating a portion of its proceeds from the auction of The Ballou Papers to Alabama State University.
Heritage Auctions is the largest auction house founded in the United States and the world’s third largest, with annual sales of more than $800+ million, and 800,000+ online bidder members. For more information about Heritage Auctions, and to join and receive access to a complete record of prices realized, with full-color, enlargeable photos of each lot, please visit HA.com
Want to get the up-to-the-minute updates and breaking news stories about Heritage Auctions? Get them as they happen at: HA.com/Twitter; Facebook: HA.com/Facebook. To view a complete archive of Heritage press releases go to: HA.com/PR. To link to this press release on your blog or Website: www.HA.com/PR-2408.