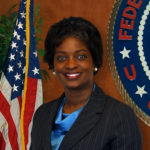 Organizers of the Radio Show, jointly produced by the National Association of Broadcasters (NAB) and the Radio Advertising Bureau (RAB), announced today that Federal Communications Commission (FCC) Acting Chairwoman Mignon Clyburn will give keynote remarks to Radio Show attendees on Wednesday, September 18, following opening remarks by NAB President and CEO Gordon Smith and RAB President and CEO Erica Farber. The opening keynote is sponsored by vCreative. The Radio Show will be held September 18-20 in Orlando.
Chairwoman Clyburn has served on the Commission since 2009. She became acting chairwoman following her appointment by President Barack Obama on May 20, 2013.
In her two terms at the FCC, Clyburn (D) has been a strong advocate for enhanced accessibility in communications for disabled citizens. She has fought to promote strong competition across all communications platforms and media ownership that reflects the demographics of America.
Chairwoman Clyburn has a long history of public service, having served for 11 years on the Public Service Commission (PSC) of South Carolina before joining the FCC. Prior to her service on the PSC, Clyburn was the publisher and general manager of The Coastal Times, a Charleston-based weekly newspaper that focused primarily on issues affecting the African American community. She co-owned and operated the family-founded newspaper for 14 years.
Clyburn is a graduate of the University of South Carolina and holds a Bachelor of Science degree in Banking, Finance and Economics.