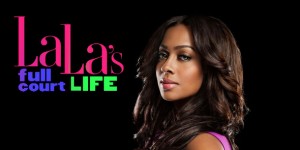 VH1 has drafted actress, TV host, businesswoman, wife and mom La La Anthony to continue her mission to have it all for the fourth season of “La La‘s Full Court Life” premiering Sunday, July 14 at 10PM.*
As her acting career thrives with roles in the upcoming Hollywood films Think Like A Man Too and Baggage Claim, and TV series including BET’s “Real Husbands of Hollywood ” and VH1’s “Single Ladies,” La La continues to prove that she’s unstoppable. Season four finds her working on a new relationship advice book, continuing to volunteer for important causes and launching a clothing line with her stylist, Jason Bolden. But La La never goes it alone, with best friends Po and Dice there for the ride. Season four will also feature appearances by La’s friends Gabrielle Union and Kevin Hart, among others.
But season four will also prove that it’s not always smooth sailing for La La and family. The pressures of a life in the spotlight, including commercial opportunities for son Kiyan, promoting her numerous projects and the ever-invasive media all take an emotional toll. Her anchors Po and Dice will face their own challenges as well, as one reconnects with her estranged father and the other has her first big falling out with La La.
With La La‘s NBA superstar husband, doting son, crazy friends and an insane travel and work schedule, her routine is more than a juggling act””it’s a Full Court Life.
“La La‘s Full Court Life” is executive produced by Cris Abrego and Angela Aguilera for 51 Minds Entertainment, La La Anthony and Carmelo Anthony for Krossover Entertainment. VH1 executive producers are Jill Holmes and Kristen Kelly.