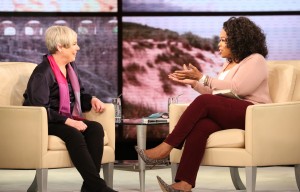 Oprah sits down with best-selling author, former Catholic nun and world-renowned religious scholar Karen Armstrong to discuss her memoir “The Spiral Staircase.” Armstrong discusses the details of her fascinating spiritual journey which began when she joined the convent at the tender age of seventeen. Hoping to forge a deep connection to God, her inspiration was met with harsh disillusionment. She says she was deeply unhappy as a nun, and unable to pray. Seven years later, she left the convent feeling like a failure, with her future in question. She avoided all organized religion for more than a decade, but then returned to the subject years later as a writer and a scholar after experiencing an “awakening” while on assignment in Jerusalem.
Today, she is one of the world’s most sought-after speakers on the subject of religion. The author of twenty books, she made headlines with her best-selling “A History of God.” In 2008, she won the TED prize, awarded to extraordinary individuals with creative and bold visions to spark global change, and created Charter for Compassion, a cooperative effort to restore not only compassionate thinking but, more importantly, compassionate action to the center of religious, moral and political life. She believes compassion is the unifying principle of all religions, which she summed up in the Golden Rule: “Do unto others as you would have them do unto you.”