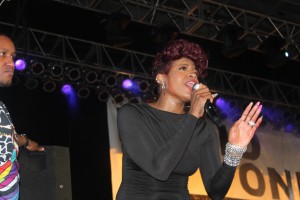 Radio-One Richmond held it’s Stone Soul 2013 Music and Food Festival this past weekend and it was an absolute sold-out success! With performances from Fantasia, SWV, BBD, HI-Five, Raheem DeVaughn, Cameo and a host of others, Virginia was treated to the show of lifetime. Peep some of the highlights below.
Fantasia took us back to the 80s during her headlining set at the SOLD OUT Stone Soul 2013. Check out a clip of her performance twerkin’ for the gods, 80″²s style. If you were wondering yes shoes went flying off, and anyone who knows “˜Tasia knows what that means!
Fantasia Peformance
The ladies went insane screaming for  Raheem Devaughn“˜s attention at  Stone Soul 2013.   Their call was answered as he jumped off stage and over the barricades to perform live from the audience. Check out this once in a lifetime moment from the SOLD OUT 2013 Stone Soul Music and Food Festival!
Raheem DeVaughn
Did BBD, Stone Soul 2013″˜s most anticipated act live up to the anticipation and expectations of the fans?
BBD Performance
SWV looked and sounded better than ever at Stone Soul 2013. While the ladies sang to the gods hit after hit, the fellas were praising the man above hip after hip! Check their Stone Soul set below!
SWV Performance