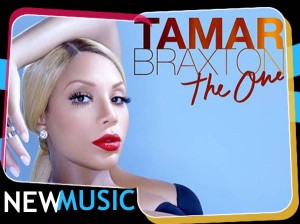 Full Video Goes Live On VEVO and WEtv.com Following Sneak Peak on The Braxton Family Values
TAMAR TO APPEAR ON BET’S 106th & PARK COUNTDOWN VIA FACETIME
Live Chat Airs in Conjunction with the Video’s “New Joint” Premiere
DEBUT SINGLE “LOVE AND WAR” CONTINUES ITS REIGN AT #1 ON URBAN ADULT CONTEMPORARY RADIO CHART FOR NINTH CONSECTUIVE WEEK
With her previous single “Love and War” holding strong at #1 on the Black adult contemporary charts, singer, television producer and actress Tamar Braxton unveils the video for her newest single “The One.” A sneak peek of video will be broadcast tonight during a new episode of WE tv’s hit show, The Braxton Family Values, which documents Tamar’s life with her five sisters, Toni, Traci, Towanda, and Trina. The full clip will premiere on WE tv’s site as well as on VEVO immediately following the broadcast of The Braxton Family Values.
On Friday, Tamar will be on hand for a live FaceTime chat to accompany the video’s premiere as the ”New Joint,” on BET’s 106th & Park. The video for “The One,” which was directed by Gil Green (Lupe Fiasco, Diddy), was shot at the Pier in Santa Monica, California. In addition to BET, the video will be in rotation on both Centric and VH1 Soul. “Love & War” and “The One” are available at all digital and physical retailers.
Co-written by Tamar, Yung Berg and LaShawn Daniels, “The One” samples Notorious BIG’s classic “Juicy,” and is already showing signs of becoming a classic on its own. Tamar described the video, as “just a summer throwback,” but it’s more than that ““ it perfectly catches the spirit of the summer and the spirit of the song. As the Source wrote, “Tamar is giving us a super summer-y vibe on…’The One.’ Get into the groove, and press play.”
“The One” is the second single from Love and War , Tamar’s highly anticipated debut for Epic/Streamline, set for release this fall.

Passing of Mary Wilson, Founding Member of The Supremes