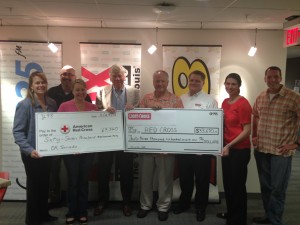 KYKY-FM ST. LOUIS, Today’s Best Music, hosted an on-air request-a-thon on Friday, May 24, 2013. The Phillips and Company Morning Show played listener requests for donations benefitting the American Red Cross effort for Moore, Oklahoma, raising $33,670 last Friday. The President of Lion’s Choice, a local fast-food chain, called in at the end of the 14-hour broadcast to match every donation, boosting the total to $67,340.
Guy Phillips from the Phillips and Company show said “It’s easy to underestimate the power of caring, but this city’s generosity touches me personally every time we ask for their help. I can’t thank our listeners enough for their generosity! Now, where are our roast beef sandwiches?”
The Phillips & Company Morning Show is made up of Guy Phillips and show members Courtney Landrum, Jen Myers, and Kevin “the Intern”. The group has been together for the past 8 years bringing entertainment to listeners each weekday morning from 5:30a ““ 10a.
KYKY is owned and operated by CBS RADIO, one of the largest major-market radio operators in the United States. A division of CBS Corporation, CBS RADIO operates 126 radio stations, the majority of which are in the nation’s top 50 markets. CBS RADIO also owns and operates KMOX-AM and KEZK-FM in St. Louis.