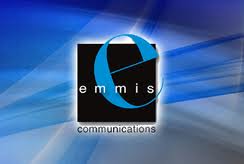 Emmis Communications Corporation (NASDAQ: EMMS) today announced results for its fourth fiscal quarter and full-year ending February 28, 2013.
Pro forma for station divestitures, Emmis’ radio net revenues (consisting solely of our domestic stations) for the fourth fiscal quarter were up 3%. Revenues reported to Miller Kaplan in the markets where Emmis competes, excluding barter revenue, grew 2.8% during the quarter. Emmis pro forma radio revenues reported on the same basis grew 4.2%, exclusive of revenue associated with 98.7FM in New York, which is being programmed by ESPN pursuant to an LMA. On a reported basis, net radio revenues for the quarter were up 2%.
For the full year, pro forma radio revenues were $128.0 million, compared to $123.9 million in the prior year, an increase of 3 percent. Market revenues for the full year reported to Miller Kaplan in markets where Emmis competes, excluding barter revenues, grew 0.7% and Emmis pro forma radio revenues reported on the same basis were up 3.4% during the same period.
“Emmis is known for operational excellence, and I’m pleased to say this year was no different,” Jeff Smulyan, President & CEO of Emmis said. “For the second year in a row we have significantly outperformed our radio markets and the radio industry. Emmis finished the year as one of the least-levered and most financially sound radio operators in the country.”
Station operating income during the quarter, pro forma for station divestitures, was $7.1 million, compared to $4.0 million for the same quarter of the prior year.
Emmis has included supplemental pro forma net revenues, station operating expenses, and certain other financial data on its website, www.emmis.com under the “Investors” tab.