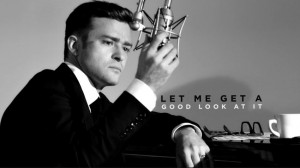 GRAMMY ® AND EMMY ® AWARD-WINNING ARTIST’S FIRST HEADLINING TOUR IN SIX YEARS WILL VISIT CITIES THROUGHOUT NORTH AMERICA, EUROPE, AUSTRALIA AND SOUTH AMERICA
THE JOURNEY WITH TIMBERLAKE’S THE 20/20 EXPERIENCE FEATURING 10 NEW SONGS WILL CONTINUE WITH WORLDWIDE RELEASE ON SEPTEMBER 30
One of this generation’s most-celebrated entertainers, Justin Timberlake , announced today he will kick off The 20/20 Experience World Tour starting this year on October 31 . After dominating the global charts with the release of his acclaimed new album, The 20/20 Experience , Timberlake will bring his electrifying live shows to fans with a worldwide tour that will run through 2014. The Grammy ® and Emmy ® Award-winning artist’s first tour in six years will visit dozens of countries throughout North America, Europe, South America and Australia. The 20/20 Experience World Tour is promoted worldwide by Live Nation Global Touring. Justin also revealed today the musical journey started on The 20/20 Experience will continue with the worldwide release of the new album on September 30, 2013 .
The 20/20 Experience World Tour will kick off in North America starting on October 31 in Montreal, Quebec at the Bell Centre with dates lined up for Las Vegas , Dallas , Houston , Phoenix , Atlanta and more. On-sale dates for this tour will be staggered with tickets for several shows going on sale starting on May 13 at 10 AM local time. Justin Timberlake’s all-new fan club, The Tennessee Kids (#TNKids), will have access to a pre-sale starting on May 7 at 10 AM local time. Fans should visit www.justintimberlake.com/tennesseekids to register for the fan club and receive a special code to access the pre-sale. A pre-sale for MasterCard cardholders will begin on May 8 at 10 AM local time. Cardholders will also have access to exclusive after shows in select markets as a part of the MasterCard Priceless Cities program. Fans should visit www.priceless.com/justintimberlake for more information.
A full list of cities, venues and public on-sale dates is listed below. For the latest information regarding pre-sale and on-sale dates, please visit www.justintimberlake.com or www.livenation.com. Hashtag: #JT2020TOUR
The 20/20 Experience , already hailed by critics as one of the year’s best albums, will continue with a second worldwide release this year on September 30 . Written and produced by Justin, the epic album will feature 10 all new songs that explore the sonic boundaries fans discovered with the music found on this year’s earlier release.