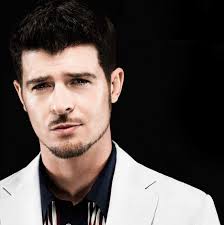 Get a Free Remix of “Blurred Lines” with Qualifying Purchase, Exclusively at RadioShack
RadioShack will premiere a new TV spot today that pays homage to the recently released music video for recording sensation Robin Thicke’s hit single “Blurred Lines” and the Beats by Dr. Dre Pill portable Bluetooth speaker.
The 30-second commercial ties into a special in-store offer that will allow RadioShack customers and music fans to download an exclusive remix of “Blurred Lines” with the purchase of any qualifying product.
“Partnering with a strong brand like Beats marks one of the ways RadioShack is broadening our customer appeal,” said Jennifer Warren, senior vice president and chief marketing officer for RadioShack. “Teaming up with Beats on this campaign invites more consumers to discover RadioShack as a destination for the hottest music accessories ““ including the Pill and Beats headphones.”
Since its release March 20, Robin’s steamy single “Blurred Lines” has become a viral sensation racking up more than eight million views on YouTube and VEVO.com. Robin is currently in the studio finishing up his sixth studio album, for his as yet untitled album, with a release date expected soon.
Consumers purchasing any qualifying Beats by Dr. Dre product, mobile phone, tablet or MP3 player in-store at a participating RadioShack location April 29, 2013 through June 22, 2013* will receive an exclusive “Blurred Lines” remix download. In addition, consumers will get $10 back when they spend $30 or more at participating RadioShack locations through June 1, 2013.**
The ad begins airing April 29, 2013 and will appear on networks including MTV, VH1, Spike and Comedy Central. It will also run during the NBA Finals on ESPN and ABC.
The TV spot can also be found on RadioShack’s techspecs blog and at the Beats by Dr. Dre Facebook page. Exclusive behind-the-scenes footage taken during filming of the “Blurred Lines” video will also be posted during the promotion, so check back often for more details.
RadioShack also plans to launch a social contest later in the campaign that will give consumers the chance to win two tickets to a future Robin Thicke concert.
To find your neighborhood store or check out all the Beats products available at RadioShack, visit www.radioshack.com.
*Offer valid through June 22, 2013 on qualifying in-store purchases at participating stores. US and Puerto Rico only. Code must be redeemed no later than July 6, 2013. Code is redeemable at www.radioshack.com/UWANTIT. Must be 13 or older. Compatible software, hardware and Internet access required (fees may apply). Void where prohibited. Digital downloads provided AS IS, no warranties. See store for details.
**Only one coupon may be redeemed per transaction and cannot be combined with any other coupons or offers, including employee discounts. Coupons are valid on all purchases of $10 or more except Bose ®, Apple ® and Beatsâ„¢ by Dr. Dreâ„¢ products, airtime, gift/entertainment cards, services, special orders, refurbished items and purchases on radioshack.com. At Dealer/Franchise locations, coupons are only valid on RadioShack merchandise.