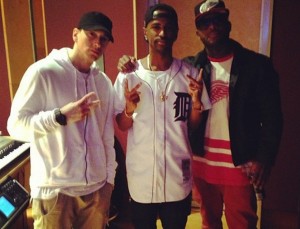 As Big Sean works on his sophomore album, “Hall of Fame,” he was spotted in the studio with Eminem and Royce Da 5’9.”  The man formally known as Slim Shady and Royce have already collaborated with each other so why not bring Big Sean into the mix. There are actually no talks that we know of from the three Detroit rappers forming a hip-hop super group but its cool to speculate. Maybe we will at least get a song from the trio on Big Sean’s upcoming album which will be released via G.O.O.D Music.