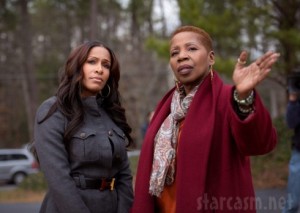 Reality TV star Sheree Whitfield’s participation in the recent episode of OWN’s ‘Iyanla Fix my Life’ was not at all what she expected. In like fashion to what rapper DMX experienced on his taping of the show, Sheree’ feels that she too was wooed under false pretenses. She agreed to be on the show based on the understanding that Iyanla would be addressing and helping her and her ex-husband Bob Whitfield, deal with co-parenting issues; unfortunately during the shoot, it was clear that what she was told would be the focus of the show was not.
“Since leaving the Housewives, I’ve been at a different place in my life, a place of healing and self-empowerment, so when Bob reached out to me about doing this show on co-parenting I was excited because I thought we were both on the same page and equally wanted to work towards mending our relationship so that we could more effectively co-parent, and even more importantly I thought it was an opportunity to inspire single parents in our situation,” says Sheree Whitfield. “However, once shooting began I felt misled because the line of questioning was centered more on accusations of my shortcomings as a wife versus how we can begin to resolve our issues.”
During the shoot and in communications afterwards, Sheree’ expressed her concerns and displeasure with the taping to Iyanla and the show’s producers and only agreed to continue for the sake of some sort of amicable resolution, which was never realized. “Although I was caught off guard by what felt like a very one-sided and judgmental approach to “therapy,” what I did take away from this experience is that I must continue to take responsiblity for doing the work to be a better person. I am completely committed to making sure that I am a positive and healthy mother for my children and being a role model for the young women that I mentor,” says Whitfield.
Sheree’ is committed to empowering and inspiring single moms, divorced moms, and other women dealing with relationship and co-parenting issues. She is working on launching her own foundation which emphasizes the importance of emotional and physical wellness for all women. Sheree is also focusing on her own career and is excited about more opportunites in film and television with her cameo appearance in ‘Scary Movie 5’ being only the beggining.
She is currently seeking speaking engagements to speak with organizations, foundations, and women’s groups about her challenges and to share her insight on surviving her own struggles and rising above them.