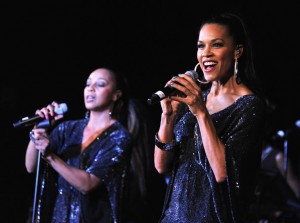 Oooh their first mistake was they wanted to be in a group. Haven’t En Vogue members Cindy and Terry seen The Five Heartbeat!?  We all know what always happens to groups.  Of course we are kidding but  after a legal and binding Arbitration, founding members of the singing group En Vogue, Cindy Braggs and Terry Ellis, under the company name En Vogue Enterprises, LLC, have been awarded the sole and exclusive use of the stage name En Vogue. No other persons or groups may secure work or perform, using the name without legal ramifications. The company owns all right, title, and interest in and to the trademark, trade name and service mark, En Vogue.
The Arbitration, which was brought by Braggs and Ellis against former member Maxine Jones, states that Jones may use the trademark En Vogue, only “in non-derogatory biographical information primarily of a personal nature, and professionally as ‘formerly of En Vogue,’ or words to that effect.” It was proven during arbitration that Jones breached the company’s operating agreement. Although a Federal lawsuit was filed, an Arbitration was demanded and held instead that no damages were requested against Maxine Jones. Per the Arbitration, legal fees and arbitration costs were however requested and awarded to En Vogue Enterprises, LLC. Braggs commented on the outcome of the arbitration saying, “Terry and I would like to thank the fans for supporting us throughout this ordeal. We are sorry for the events that transpired that were out of our control, however, we will continue to be there for our fans doing live performances and carrying on the legacy of the En Vogue brand.”