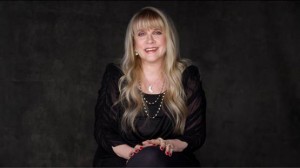 On this Sunday’s episode of Oprah’s Master Class Singer/songwriter Stevie Nicks discusses her mother’s recent passing, her bold approach that led to a legendary musical partnership with Lindsey Buckingham, her band Fleetwood Mac, her decision to forgo marriage to pursue her music, the mistakes she has made including marrying her friend’s husband, her challenges with drugs and getting clean.
Here is brief quote from the episode with Stevie discussing her mother, “My mother was always totally supportive of me. And whatever I wanted to do. Even as a young girl. But she was also very strict with me. And she was hard on me a lot of ways because she wanted me to be independent. And that’s because for her she wanted to be independent and she was very poor when she was young. So she really you know rose up above the fray to be independent at 16. And she wanted me to, to not ever have to depend on anyone.”