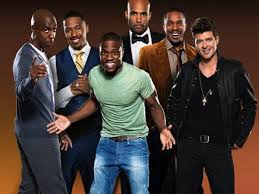 Earlier this year, more than 4 million viewers tuned in for the series premiere of “Real Husbands of Hollywood” on BET Networks. Today, the network announced a second season pickup with a 12 episode order for the smart, semi-scripted comedy that is now being labeled the “fakest reality show ever.” In “Real Husbands of Hollywood,” see what “real life” is like for comedian and actor Kevin Hart and his Hollywood pals as they navigate their way through stardom alongside – or in spite of – their famous wives. The new season will continue to find the funny in the lives of these Hollywood men when fact, mixed with fiction lends itself to ridiculous yet hilarious scenarios. Packed with punches – both literal and figurative – the mockumentary style series gets down and dirty – shining a light on the male ego and “bestie” beef presented from the “celebrity spousal” perspective.
Hart teams up with season one cast members Nick Cannon , husband of music superstar Mariah Carey, Boris Kodjoe , husband of actress Nicole Ari Parker, Duane Martin , husband of actress Tisha Campbell-Martin , J.B. Smoove, husband of the songstress Shahidah Omar and Robin Thicke , husband of actress Paula Patton. A star-studded guest line up will be seen in season two as audiences can expect the return of such familiar faces as Nelly in the coming season.
“When we launched this series in January, we knew our audience would have as much fun watching it as we had making it, and since it has been on the air, fans have voiced on social media that they want more. So this was a pretty simple decision: ‘Hey! Let’s make more!’ ” says Stephen Hill , BET’s President of Music Programming and Specials. “We are beyond thrilled that Kevin Hart and the stellar “Husbands” will be back bickering and back-biting, for another season on BET.”