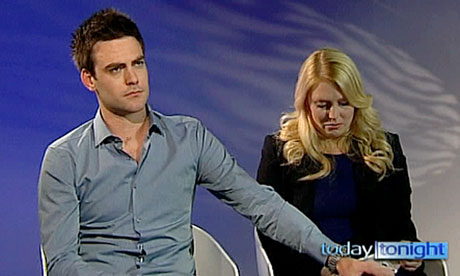 Talk about a radio prank gone HORRIBLY wrong not only has this show been canceled but we would be shocked if they ever work on the air again. Ironically, the  Southern Cross Austereo, the company which owns 2Day FM, said while their time slot had been replaced with a new show, the pair remains employed by the station and are on leave.
The Hot 30 show, the Australian radio show hosted by DJs Michael Christian and Mel Grieg, the duo behind the horrific prank call to the Duchess of Cambridge’s hospital last December, has been replaced on air by its Sydney-based broadcaster, 2Day FM. A new program, hosted by a different Radio DJ will fill its nightly slot.
was taken off air following the death of the nurse Jacintha Saldana, who had forwarded the pair’s prank call to the Duchess’s room at the King Edward VII hospital in central London early last month. Three days later, Saldanha, 46, was found hanged in her apartment in the nurse’s quarters.During the call, in which the DJs pretended to be the Queen and Prince Charles, the nurse caring for Kate Middleton revealed personal information about the Duchess’s condition relating to a severe form of morning sickness. The prank call sparked international outrage against the radio station, which had not gained consent from the nurses involved for their voices to be broadcast before putting the prank call to air.
“We look forward to Mel (Greig) and MC (Christian) returning to work when the time is right, in roles that make full use of their talents ““ we will discuss future roles with them when they are ready,” said Southern Cross Austereo chief executive Rhys Holleran.
The Australian Communications and Media Authority (ACMA), which regulates commercial radio stations, launched its own investigation into whether 2Day FM had breached the Commercial Radio Code of Practice. ACMA has the power to revoke the station’s licence or to impose conditions on how it operates.
Tweet
Share1
Share
Pin
1 Shares