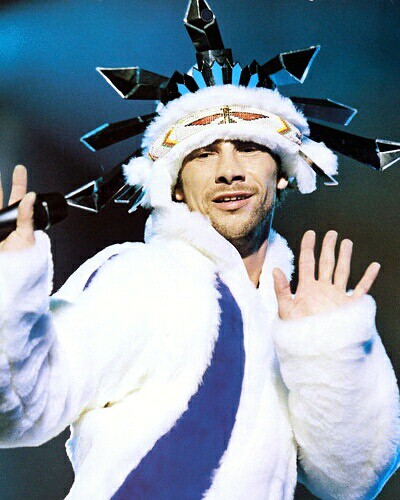 British jazz funk/acid jazz band Jamiroquai have announced a tour which is to commence on February 7th in Sao Paulo, Brazil. Jamiroquai have not performed in the U.S. since November 11, 2005 which was a performance during Jimmy Kimmel’s concert series in Hollywood, CA, and the Wiltern Theater in Los Angeles the night before.
Best known for their music video “Virtual Insanity”, the band, fronted by Jay Kay, won big at the 1997 MTV Video Music Awards, as well as took home a Grammy for Best Pop Performance By A Duo Or Group With Vocal in 1998 for the song.
Front man Kay is also known for his run ins with paparrazi, a vast array of collectible vintage cars, and a collection of colorful performance headdress.
The tour wraps up in Guadalajara, Mexico on March 1st. Complete tour dates can be found at https://www.jamiroquai.com/shows.