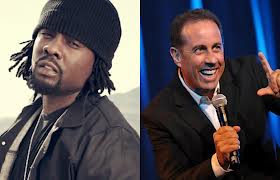 So this is quite interesting. I”m utterly convinced that nothing is impossible anymore. Wale and Jerry Seinfeld are linking up to work on some music. Apparently Wale is a big fan of Jerry Seinfeld and Jerry’s wife is a big fan of Wale. Wale once did a mixtape entitled, “Nothing” based off a classic episode of Seinfeld. Wale and Jerry Seinfeld together on the same song or songs should make for something memorable. The one thing you got to love about music is that it does transcend race, gender, and everything else. Watch this video of Jerry Seinfeld explaining how it all went down and how he ended up in the studio with Wale as well as this strange love triangle.