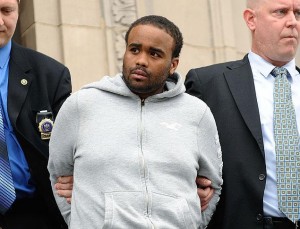 On Tuesday, January 8, the  man accused of fatally shooting former Hot 97 and BET’s 106 & Park personality  Corey “DJ Megatron” McGriff two years ago plead guilty to first-degree manslaughter. He will serve a 21-year jail sentence.
According to the  New York Daily News, William Williams, 22,  faced trial in Staten Island for second-degree murder and, if convicted, was facing a 25 years to life prison sentence. Instead, he opted to plead guilty to the first-degree manslaughter charge for a lesser sentence.
Williams’ charges stem from a 2011 botched, premeditated robbery involving Richard Cromwell and himself, during which the duo stalked the DJ due to his apparent financial success. Witnesses and  video surveillance spotted Williams and Cromwell before and after DJ Megatron was killed by a single gunshot to the chest, linking them to the crime.
The robbery awarded the two  thugs some of McGriff’s cash and a wristwatch given to him by his daughter, then just 11 years-old.
Both men were arrested and charged with murder, robbery and criminal possession of a weapon. Cromwell’s next court date is February 27.  His attorney stands firm in his claim that he isn’t guilty.
Corey “DJ Megatron” McGriff is survived by three children and his fiancee.  He was slain only a block away from his home in Staten Island’s Stapleton neighborhood.