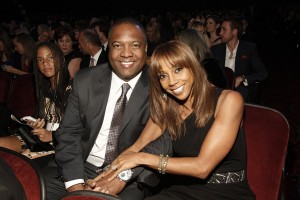 Holly Robinson Peete and Rodney Peete, founders of The HollyRod Foundation, will host a Media Roundtable Thursday, May 30, 2013 at Crustacean, located at 9646 Santa Monica Boulevard, Beverly Hills, California. The event begins at 4:30 pm. Topics for discussion include the Foundation’s work for autism and Parkinson’s disease, the Foundation’s extensive capital campaign to expand their valuable family services programs and Ms. Robinson Peete’s appointment as Brand Ambassador for Fuhu’s nabi tablet. There will be a sneak peek at plans for the DesignCare 2013 event as well.”HollyRod Foundation was inspired by the journeys of a father and a son. Parkinson’s disease and autism have touched our family in a profound way. We understand what families impacted by one or both experience every day. Rodney and I are honored to shine a light or serve in any way we can. HollyRod has provided us with a way to achieve this” says Ms. Robinson Peete.In recognition of her commitment, Fuhu recently named Ms. Robinson Peete as Brand Ambassador for the nabi family of products made just for kids. Ms. Robinson Peete will educate parents on the benefits of integrating a tablet into their children’s lives as a key tool for both learning and entertainment. She will also spearhead the company’s autism program, Inspire, as lead strategist. Inspire generates awareness for autism and Fuhu generously donates $1 from the sale of each nabi tablet to fund autism research.Since 1997, DesignCare has been a staple fundraiser for the foundation and this year’s event is going to be the most exciting in its 15-year history. DesignCare 2013 is set for July 27, 2013 in Malibu, CA.