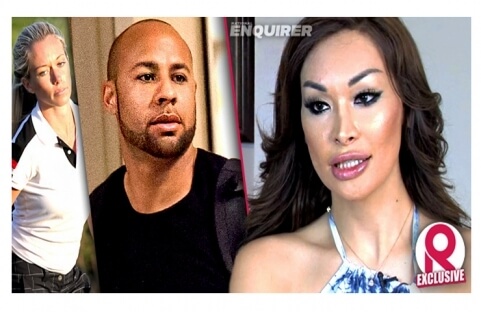 So Hank Baskett is busted for having an affair with a Transgendered Woman by the name of AVA. His wife Kendra Wilkinson tosses their wedding ring down the toilet…

I read this story this morning and could not help but to think of the consequences all of these people, including Hank and Kendra’s children will suffer simply from being judged in America.  I’m sure most people will look at the details and have a judgement of one or all three people but I wanted to look at it from a different perspective, the human one.  Can I borrow your human side for a minute? Judgement is the most vile and harshest thing in the world. It kills dreams, destroys self-worth and esteem and it helps to shape something into a big ball of negativity when it could have been something positive. It demeans cultures and sets the tone for racism and it puts the person doing the judging on a false pedestal of elitism, until they THEMSELVES are judged! It happens every single day, hour, minute and second in America.

Why are we SO compelled to judge others? As if our own lives are not complicated enough by our OWN secrets and demons.  Why does it make us feel better to see someone else suffer? Why do we kick men and women when they are already feeling down, this INCLUDES the church. That’s what judgement of ANY kind is and I have been guilty of it because I have been so judged especially by people in my own community as God is my witness Black folks will re-shred shredded paper then re-shred it again and again and again. I try my best now to NOT judge others because I don’t want to that guy. Judgement of others is a blaring representation of the misery, lack of and self-hatred in our OWN lives.  I have concluded that in most cases, judgement is based on jealousy and envy. If you are rich then I have the right to bring you back down to my level per say. If you are better looking than me than I’m going top use this opportunity to make you look as ugly as I feel, You are a bad mother for leaving your kids in the car even though I used to leave mines at home by themselves and with ex boyfriends who didn’t like them when I went to the store etc etc.

Let’s explore how judgement works in this case…..Kendra has been judged for marrying a black man. Hank has been judged for marrying a white woman. Hank has been judged for marrying a white woman who was once a Hugh Hefner “side chick.” Kendra has been judged for using an old rich white man and being a gold digger. Hank KNEW he would be judged for his attraction to transgendered women so he kept it a secret even from his wife who has also been judged by other white people.  He may have gotten married so that he could appear “normal” to the people who would judge him but those same people have their own ABnormal secrets.  The transgendered woman Ava Sabrina has certainly been judged the most and now she will be judged again as a “Tranny” that had an affair with Hank Baskett and was dying for at least 15 minutes of fame that would have never been hers if she had not borrowed someone else’s fame, even to the point of hurting them.  Finally with all that has happened Kendra who just gave birth to their second child will be judged again for not knowing who she married and the naysayers who didn’t want to see her marry a black man in the first place will think they were right all along but the truth is it is SOCIETY that plants the seeds for these situations. We love to judge others so that the onus is never on us or our own secrets that we keep.  Now the kids will be affected in the future when other kids tease them for not just being mulatto but also for having a father that has a thing for “trannies.”  If we don’t make people ashamed of who they are, they can be who they REALLY are.  Wonder what would happen if every person, organization and church group all minded our OWN business and lived to let live? Oh well. You know…by the time you look at all these angles, you should realize no matter WHAT you do, you will be judged… so you might as well do what will make you happy.