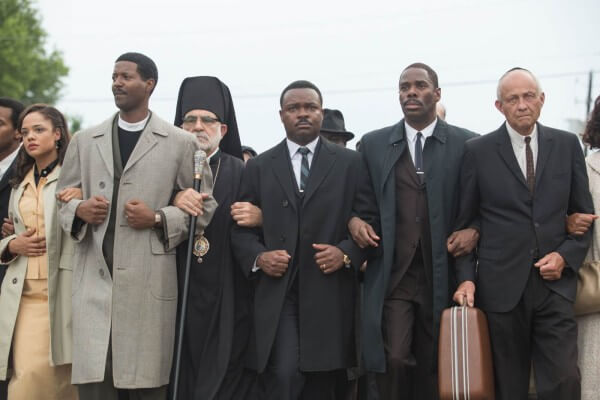 The sponsorship marks the first time since the inception of the nationwide Selma for Students program that a company has provided the funds for an entire school to see the film.

Nearly 500 students and staff at the STEM high school in Brooklyn will experience the film due to the contributions of Google and the support of software company Infor and Paramount Pictures.

“As the Founding Principal of P-TECH and as a proud Morehouse College graduate, I am thrilled that our most famous alum, Dr. Martin Luther King, Jr. is at the center of the film ‘Selma,’ and I commend P-TECH teacher Zakiyyah Ali for her efforts in helping to make the ‘Selma’ experience a reality,” said Rashid Ferrod Davis, Founding Principal (P-TECH).

“We are grateful for the generosity of Google, Paramount Pictures and the others who are making it possible for our entire student population, faculty and staff to see ‘Selma.’ Our Brooklyn students are pioneering a movement and the collective experience of seeing the film will be powerful and empowering for all of us.”

“It is imperative for me to keep alive the stories about how African-Americans have dealt with struggle and resistance to injustice. It is equally important for my students to see that activism is selfless work.

As our students live in an age of activism, ‘SELMA’ and the digital technology used to make the film provide them with a visual blueprint on how generational cooperation works for the good of all people.

At one point in time, our pioneers could only record their histories through griots with limited reach. Today, technology allows these heroic stories to be told in ways in which the reach is nearly endless,” said P-TECH history teacher Zakiyyah Ali, whose desire to bring “SELMA” to her students led to the partnership with Google.

Pathways in Technology Early College High School (P-TECH) is a new type of school (grades 9 through 14) that brings together the best elements of high school, college (New York City College of Technology) and the professional world (IBM).

P-TECH enables students to begin their college and professional lives more quickly and with more support than the typical school-to-work pathway.

Graduates of P-TECH have the opportunity to earn an associate in applied science degree and leave the school with the skills and knowledge they need in order to continue their studies or step seamlessly into competitive jobs in the Information Technology (IT) industry.

President Obama, Secretary Duncan and other dignitaries visited P-TECH in Fall 2013 in praise of its curriculum and model, which has been replicated.

P-TECH offers college-level courses in math and science and offers students a high school diploma and an Associate’s Degree in computer systems or electromechanical engineering.

The Selma for Students program has grown steadily since its launch in New York City on January 8th. To date, African-American business leaders in 32 locations across the U.S. have raised funds for free admission for middle and high school students to see “SELMA.”

More than 300,000 students nationwide will experience the critically acclaimed film for free. Due to the program’s popularity and the ongoing efforts of the organizers, student tickets in Boston, Detroit, New York and Northern New Jersey are sold out.

Philadelphia expanded its program and added 3,000 more tickets to meet the overwhelming demand, while the business leaders in Northern New Jersey raised additional funds to send 1,000 students in Trenton to see the film.

Viacom’s Paramount Pictures, which is distributing “SELMA,” is coordinating the programs with participating theaters in the U.S.

For a list of participating theaters in select cities offering free admission to students during this program and for information on group sales, visit www.SelmaMovie.com/studenttickets

Middle and high school students who present a current student ID or report card at the box office of any participating theater will receive free admission while tickets last.

To help get the word out about the program, tweet using the hashtag #SelmaForStudents.Directed by DuVernay and starring David Oyelowo as Martin Luther King Jr., “SELMA” is nominated for Academy Awards® for Best Picture and Best Original Song for “Glory” by Common & John Legend.

The film earned a Golden Globe Award for Best Song for “Glory” and was nominated for Best Picture, Best Actor and Best Director.Paramount Pictures, Pathé, and Harpo Films present “SELMA.”

“SELMA” is directed by Ava DuVernay. “SELMA” is the story of a movement. The film chronicles the tumultuous three-month period in 1965, when Dr. Martin Luther King, Jr. led a dangerous campaign to secure equal voting rights in the face of violent opposition.

The epic march from Selma to Montgomery culminated in President Johnson (Tom Wilkinson) signing the Voting Rights Act of 1965, one of the most significant victories for the civil rights movement.

Director Ava DuVernay’s “SELMA” tells the story of how the revered leader and visionary Dr. Martin Luther King Jr. (David Oyelowo) and his brothers and sisters in the movement prompted change that forever altered history.

“SELMA” is playing in theaters nationwide. To learn more about the film, go to https://www.selmamovie.com