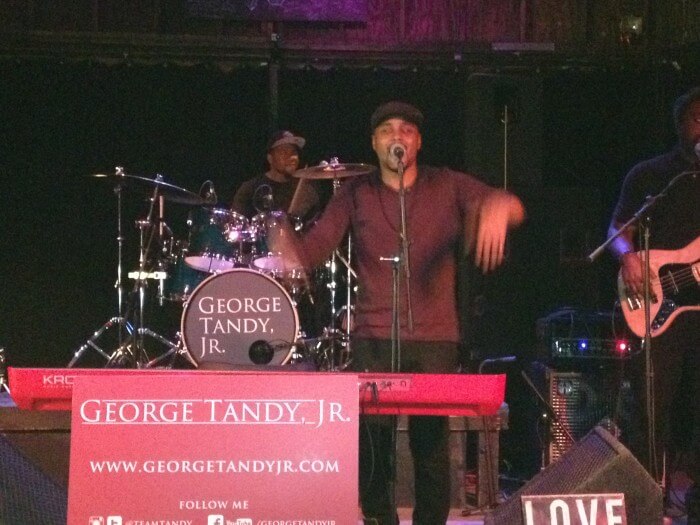 On a pleasantly warm yet breezy Chicago summer night, the city was buzzing with excitement in anticipation of one of the most talked about concerts in town and around the globe for that matter. Yes, the amazingly talented George Tandy Jr. was in town but many of the Windy City natives were On The Run for the Jay Z and Beyoncé concert that was going down at Soldier Field.1.9 miles southwest of Soldier Field is Reggie’s Rock Club where George Tandy Jr. would be performing that same evening. Although Reggie’s wasn’t packed to capacity, the energy resonating throughout the building was still one of anticipation for a new artists that has been blazing a trail via Urban AC radio with the success of his single, “March.”Once George Tandy Jr hit the stage, all eyes were on him.  Accompanied by his band, his own personal keyboard, a microphone, and a comically charming personality, Mr. Tandy didn’t disappoint the crowd on hand.  From his opening ballad, “Gravity” to his mid tempo groove, “Bonfire Music,” the Virginian native but now Miami resident, displayed amazing vocal ability, personality, musicianship, and impeccable stage presence.You hear most musicians say it, but George Tandy Jr. seemed to be completely enjoying his experience doing what he loves. He is obviously passionate about his music and his fans but he doesn’t take himself too seriously.  With his new album, “The Foundation,” dropping July 29, 2014, he gave an inspired and uplifting performance despite the circumstances of performing on a night when the musical juggernaut known as the “The Carters,” were only a good power walk away.  I was already digging his music but after seeing George Tandy Jr. perform live, I see nothing but success in his  future.Capping off his show off with his hit, “March” was the absolute icing on the cake as women and men alike sang in harmony along with George.  On a night where he could have been intimidated, bitter, or underwhelmed,  he was the exact opposite and much more.  On July 24, 2014 in the city of Chicago, George Tandy Jr. took another leap toward success and those of us in attendance will continue to “March” with him along his journey.