Former A&M rep Paulette DeSuzia died today in her sleep. No word on services but we will keep you posted. 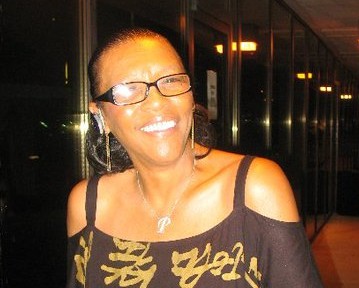 Industry vet A. Scott Galloway wrote:This One…is personal… I am deeply saddened to share that music industry publicity and promotions veteran PAULETTE DeSUZIA has passed… Via her company From A Whisper to A Scream (named after her all-time favorite Esther Phillips LP) and her industry tip sheet “Peepin’ the Scene,” Paulette was a solid-as-a-rock backbone of grass roots support to many on the soul side of the bizness.I first encountered Paulette when she was working at Avenue Records, a company for which I wrote one of my very first liner note essays, Rap Declares WAR. The best thing that came out of that hook-up was lasting friendships with Paulette and my dear friend La Kwanza. Funny, we were JUST speaking fondly but with concern of Paulette over pancakes a couple of weeks back…no coincidence I am sure.Paulette was a card – a WILD card! So many memories of this ever smiling yet fussin’ cantankerous woman come to mind. I remember dancing with her at B.B. King’s club in Universal City during a Mandrill show (she was tight with ALL the hip bands from the `70s), her sitting on my Mom’s porch tellin’ me deep and HI-larious TALES of the time she dated my favorite member of the Temptations (wouldn’t YOU like to know), and a trip to Vegas where she innocently tried to play matchmaker between me and this actually cute radio girl from somewhere or another. Paulette was super supportive of my career and always pulled me in on whatever she was hustlin’ – some of it “On The One,” some of it WAY “off the map”…AND SHE KNEW IT, TOO – but you always tried to help SOMEHOW…`cuz it was Paulette asking. Best of all, she provided an opportunity for me to be interviewed by some high school students about my work as a writer…specifically to give them ideas about gigs behind the scenes in the industry. Trust-n-Believe, I got as much out of that as the kids.The last time I spoke to her was just two months ago. I needed to be reconnected with Wayne Henderson for two liner note essays I was working on for the groups Caldera and Pleasure, and I knew just who could find him. MAN, Paulette made that happen with a swiftness – before I could BLINK – and in the process we got to talk. I am so glad I thanked her for always being there for me and told her I loved her. She is also thanked at the end of both my essays for those forthcoming projects.These transitions so often happen out of the blue. When they do, they knock the wind out of you…but we have to keep on steppin’. I am fortified in knowing that I am steppin’ having known a wonderful CHARACTER of a woman from dem GOOD OL’ DAYS of “The Bizness” – my “Industry Auntie” who saw something in me and just took me to her bosom like one of her own. I am truly going to miss the one-of-a-kind Ms. Paulette DeSuzia. â™¥Clear a space on the dance floor for a REAL Soul Mama…and make sho’ da band rilly know how tuh…”GET DOWN!” (cue WAR > Three Fingers > R.I.P.)https://www.youtube.com/watch?v=tAgLY9RzwME