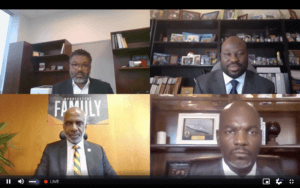 Corporations are stepping up their philanthropy to historically Black colleges and universities (HBCUs) in the wake of protests for social justice and equality.

That was one message from a panel “Corporate Philanthropy: A Corporate Response to the Challenges of Today and the Future,” moderated by Florida A&M University (FAMU) President Larry Robinson, Ph.D., during the Third Annual National Summit for Sustainability of HBCUs on Thursday.

Robinson said corporate partnerships and philanthropy will assume increasingly important roles in the financial health of HBCUs and in supporting the development of talent needed for companies’ bottom line.

In his opening remarks, Brown said Dominion Energy began discussing making a transformational gift to HBCUs beyond one-time donations a few years ago. This year, the utility committed to providing $25 million to 11 HBCUs and $10 million in scholarships for African American students in the utility’s service area, which includes Virginia, North Carolina and South Carolina.

“We were really shocked when we saw the financial disparity in these institutions compared to predominantly white institutions,” said Brown, referring to the size of the HBCU endowments. Virginia Union, an HBCU, had a $29 million endowment compared to Virginia Commonwealth University’s $2 billion endowment. His company’s goal is to shore up the bottom-line of HBCUs and their students.

“We are making seven-figure gifts. There are real time needs in the way of dealing with budget cuts, tuition shortfalls and just other operating needs. We can put some money in the endowment and provide direct student assistance,” Brown continued. He said Dominion Energy has given to HBCUs over the years, but this would be the largest gift as part of a six-year program.

“We see this as of strategic importance to us from a workforce development standpoint as well as supporting the work of social and racial equity,” he added.

Mandell Jackson, vice president/general manager Quest for Health Equity at Quest Diagnostics, said his company began a relationship with HBCUs about three years ago. He said the strategy has been to be deliberate and remain committed long-term.

“We’re trying to see if the HBCU footprint aligns with our infrastructure. Anything we can do to quickly get people back to health, we will do it,” Jackson said. “I can’t say we are where we want to be, but we are definitely pointing in the right direction.”

‘Thanks for your commitment’

Robinson thanked the panelists for their companies’ contributions to assist HBCUs.

“What you are doing at your companies; it’s novel,” Robinson said. “We appreciate every dime, every internship, every student who is hired. Whether it’s six digits, or seven or eight. We appreciate it all. Thanks for your commitment to historically Black colleges and universities. I always say, where would be without HBCUs.”

Panelist Fred Lowery, senior vice president and president of Life Sciences Solutions and Laboratory Products for Thermo Fisher Scientific, said his company’s leadership realized early during the pandemic that its technologies could be useful to help the economy, help people get back to work and students back to school.

“We thought about HBCUs. There’s a great need. If you think about the impact of COVID-19 and there has been a greater impact in the Black community both in terms of incidents and deaths,” Lowery said. “Think about where HBCUs are located. They’re in black communities. So we thought, how can we help HBCUs come back to campuses safely.”

As part of the Just Project, Thermo Fisher Scientific set aside $25 million in equipment and supplies to help a number of HBCUs establish on-campus laboratories to test specimens from students, faculty and staff.

FAMU received $2.5 million in supplies and equipment from Thermo Fisher and $1.5 million from the Bill and Melinda Gates Foundation to set up and operate the lab. The FAMU certified lab will serve as a hub to test samples sent from Florida’s other three HBCUs.

“It was important for us to help drive capabilities inside the HBCU network, not just write a check and not just to partner with someone else, but to build capabilities that would be lasting as relates to COVID-19 testing involving students and faculty who are going to learn something they could use in the future,” Lowery said. “We wanted to have HBCUs out front proving that having a testing regime was part of creating a safe environment.”

“We are trying to use this as a challenge to increase diversity in the biotech space,” Lowery continued. “We hope other companies will pick up the mantle as well. The talent is absolutely there. We need the talent to meet the societal need.”