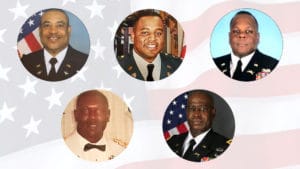 The Florida A&M University National Alumni Association (FAMU NAA) honored five veterans for their military service and for their contributions to the University on Veterans Day.

“It’s not just service. It’s about giving back to the University,” Clark said. “It could be recruiting students, giving back, being an advocate. You have to do something beyond service.”

He is a life Member of FAMU NAA and a member of the NAA Plant City Chapter. Stubbs was four-year FAMU Rattler Battalion scholarship recipient and a Distinguished Army ROTC graduate, who was commissioned in 1986 into the Military Police Officer Corps. He established the Colonel Keith Stubbs Scholarship to support students from King High School, Bartow High School, and Howard Blake High Schools attending FAMU. He is a peer mentor with the Wounded Warrior Project where he assists fellow veterans’ transition to civilian life and ensure skills and lessons learned from military service extends to a meaningful life and career.

Stubbs is an annual and consistent supporter of FAMU athletics; within the last 24 months, he donated more than $22,000 in the new Investing in Champions program; provides additional targeted support to men and women’s basketball, softball, and men’s golf.

Retired Lt. Col. Ricardo Kinsey is a Tampa native who graduated from FAMU with a bachelor’s in Business Administration. He holds master’s degrees from Florida Institute of Technology,  the University of Phoenix and Argosy University. His military service includes time in the infantry and in maintenance battalions.

Since his retirement, Kinsey has established five endowed scholarships at Florida A&M University as well as the LTC Ricardo Kinsey Scholarship for high school seniors. He has provided 14 scholarships to high school students.

He was awarded the FAMU NAA Distinguished Alumni Award in 2018 for community service. He was recognized by FAMU in 2019 for his continued support of student athletes.

Kinsey was also instrumental in creating the Te-Andre Brown Endowed Scholarship in memory of the Brown, a reserve officer training Cadet, who drowned in Panama City in March.

Retired Col. Sam Driver is a 1990 distinguished military graduate of FAMU.  He served globally as an Army officer before returning to FAMU from 1997-2000 as an assistant professor of Military Science in the FAMU Army ROTC program. He received many military awards including the Japan Defense Cooperation Award, Meritorious Service Medal (5th Award), Legion of Merit (3rd Award), and the Bronze Star. He attained the rank of colonel in 2014 and retired from the U.S Army in 2017 after 25 years of service.

Retired Col. Miciotto O. Johnson of Atlanta graduated from FAMU with a bachelor’s in music education. He was commissioned in Armor in 1986 and holds a master’s from Webster University in information management and computer resource, and a master’s from the United States War College in Strategic Studies. He retired in 2015 after almost 30 years in the U.S. Army.