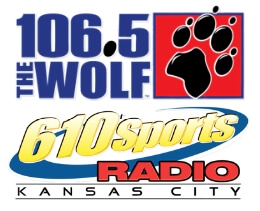 106.5 The Wolf to Become the New Flagship Station of the Chiefs

Entercom, a leading media and entertainment company and the unrivaled leader in sports radio, and the Kansas City Chiefs have announced a multiyear agreement. 106.5 The Wolf (WDAF-FM) has been named as the new flagship station of the 70 station Chiefs Radio Network and home of the Chiefs beginning on February 16, 2020. As part of the agreement, 106.5 The Wolf will broadcast all preseason, regular season and postseason games, along with pre-game and post-game coverage.

“We are extremely pleased to enter into this new partnership with the Kansas City Chiefs, one of the NFL’s most well respected and prestigious organizations,” said Dave Alpert, Regional President and Market Manager, Entercom Kansas City. “Entercom’s eight station cluster of music, news and sports talk stations hosted by Kansas City’s leading personalities align with vast digital and podcast opportunities, and will deliver the premium and comprehensive coverage Chiefs Kingdom desires seven days a week, all season long.”

“We look forward to partnering with 106.5 The Wolf and the powerful Entercom family of stations,” said Mark Donovan, President, Kanas City Chiefs. “The ability to bring our game broadcasts and existing weekly radio shows under one roof is a large part of this change, but we are equally excited about creating new content and developing new opportunities for Chiefs fans to engage with their favorite team.”

One of the Midwest’s most recognizable radio and television personalities, “Voice of the Chiefs” Mitch Holthus will return for his 27th season as the play-by-play personality for the Chiefs Radio Network. Owning more years of service than any other “Voice of the Chiefs” in team history, Holthus has called a franchise record 426 regular and postseason contests for Kansas City.

As part of the agreement, 610 Sports Radio (KCSP-AM) will become the official broadcast partner of the Kansas City Chiefs, with exclusive rights to Chiefs programming, including live radio broadcast rights to the Chiefs weekly in-season press conference with the club’s head coach and a weekly one-on-one interview with the starting quarterback. In addition, 610 Sports Radio will broadcast the Chiefs Kingdom Radio Show on Monday nights from 6:00 p.m. to 7:00 p.m., which is hosted by Chiefs play-by-play announcer Mitch Holthus, and includes call-ins from the head coach and live on-site guest interviews with key players.

Listeners can tune in 106.5 The Wolf (WDAF-FM) in Kansas City, as well as nationwide on the RADIO.COM app and website. Fans can also connect with the station on social media via Twitter, Facebook and Instagram.

That Time When Grace Jones Switched Lanes: Feeling Like a Woman,...